This seems like an ideal place to ask a question that has been keeping me confused for a little while now. But I apologize if I've posted in the wrong area.

I've placed a heating pad at the base of the box (Temp Sensor #1 lies right in the center of this pad. A graphic showing my setup: 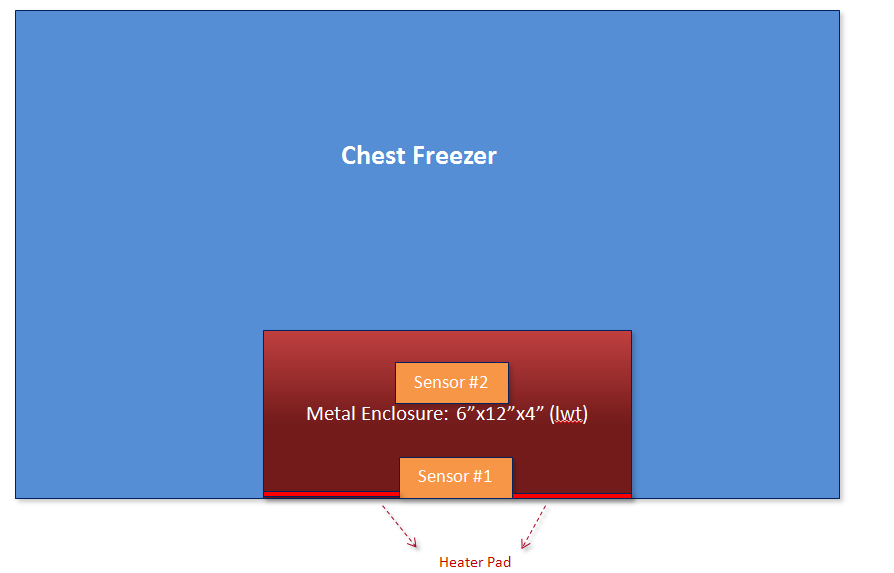 I've also implemented a simple on/off temperature controller, that senses when the temperature goes above a certain set-point and turns off (hence you see the highs/lows for Temp Sensor #1). 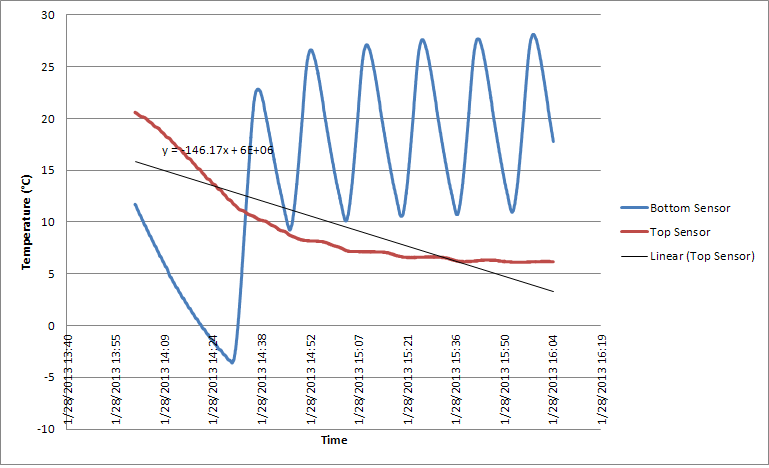 As you can see from the image, the lower sensor (blue) has the peaks/troughs corresponding to when the heater turns on/off. The heater gets triggered every time the sensing temperature goes below the set point. What I don't understand is why the top sensor (red) has a periodically decreasing trend (it doesn't have highs/lows similar to the bottom sensor)? It doesn't seem to be affected by the heater turning on at all? Even though it is merely 4" away from the heater inside the metal enclosure.

I understand that Sensor#1 is probably changing immediately due to the heater very quickly affecting the metal base temperature via conduction. Whereas the second sensor is probably measuring the air around the metal enclosure at the top, and since air is an insulator, it takes longer to heat up. But there should be at-least some highs and lows I'd imagine. The continuous decreasing trend doesn't make any sense ...

Then, I suspected that perhaps my second temperature sensor was damaged. But that wasn't the case. I've tested both sensors and they work fine. Also here is a graph of the temperature trend, when I place the enclosure (with the sensors) in the freezer with no heater action. Intuitively as you can imagine, there is merely a decreasing trend for both sensors (shown below) due to the effect of the freezer:

Any suggestions please as to why I notice no temperature variation at Sensor #2 location when the heater turns on/off?

It's to do with thermal inertia. If you look closely at the graph you'll see there are highs and lows for sensor #2 also - just much smaller than sensor #1, and they have the same period (time interval) as sensor #1, indicating they stem from the same heating oscillation.

You're of course right when you say that air is a poor conductor, and so it will essentially dampen the effect of the heater - there are rises and falls, just over a smaller, dampened range.

I'm not entirely clear on when the freezer switches on and why it would be on when the heater is also on, but it seems that's the case from the graph. Another reason for the imbalance is that the freezer has a far greater cooling effect than the 25W heater can heat. Most freezers are in the order of 120W or more, and have a Coefficient of Performance (CoP) of 2 or more when chilling to beer temperature, so you're getting about 240W of real cooling power vs 25W of heating power (resistance heating has a CoP <= 1) - so a 10:1 difference.

I imagine the main reason you're seeing any fluctuation in sensor 2 at all is because of the box, which confines the convection of heated air to within the box. I imagine if you removed the box and did the same thing, you'd see very little change in sensor #2 because of the large volume of cooler air surrounding it.

Not the answer you're looking for? Browse other questions tagged temperature or ask your own question.

3
Side-effects of 'lower than recommended' fermentation temperatures?
5
What's the best/safest way to handle likely bottle bombs?
5
Going Below Optimum Yeast Temperatures (For Ale in Particular)
2
Why Does a Heater in a Swamp Cooler Require a Pump to Distribute the Heated Liquid?
1
Would Yeast survive the temperatures of distillation and properly carbonate?
2
Effect of temperatures over beer oxidation
1
Second Fermentation In Water Bath
4
Why are some of my batches too sweet in the bottle, and can I rescue them?
5
Interpreting single-infusion mash instructions with two temperatures listed
2
Keezer temperatures