Whirfloc shelf life and use

Making a batch and for the first time the recipe calls for a whirfloc tablet. From what I understand the tablet assists with settling the haze produced by proteins. I've read a half tablet to 5 gals. What is the expected shelf life? And is this something I should throw in on every batch I make in the future?

I've kept Whirlfloc for nearly a year and it was still fine. I don't see why you couldn't keep it even longer. Although some people say you don't need it for dark beers, I disagree. Even in a very dark beer you can see it it's clear or not. I use it in every batch. I don't think it's a deal breaker if you don't use it, but based on the times I've forgotten it, I do think it promotes better clearing.

I use whirlfloc in pretty much every brew apart from some wheats where the protein haze is part of the style. Shelf life is about 2 years (see below.)

Even though the recipe calls for whirlfloc, you can use either whirlfloc or irish moss, both are kettle finings and contain the same active ingredient - kapa-carrageenan (Wikipedia lists other types and surprising uses.) I do 10 gallons mostly, so 1 whirlfloc tablet is the right dosage. When doing 5 gallons, I prefer the moss, since 1/2 tsp is easier to get than having to mess about with cutting whirlfloc tablets in half.

Irish moss has a shelf life of several years. (See related question Does Irish Moss Expire?). Given that whirlfloc is powdered, with a greater surface area, the shelf life can be expected to be reduced. I can't find the actual MSDS, but a reference is here:

In unopened original Kerry Bio-Science packaging, WHIRLFLOC BWS has a shelf-life of 24 months from date of manufacture.

That's describing the sand-like powered form of whirlfloc. The compressed tablets I would guess kept in an opened, but airtight bag, would last about as long (tablet form reduces surface area, increasing shelf life, but the opened bag counter-acting that.) So, 2 years shelf-life seems reasonable.

EDIT: Here's a picture of how clear the wort will be after a good boil and kettle finings. 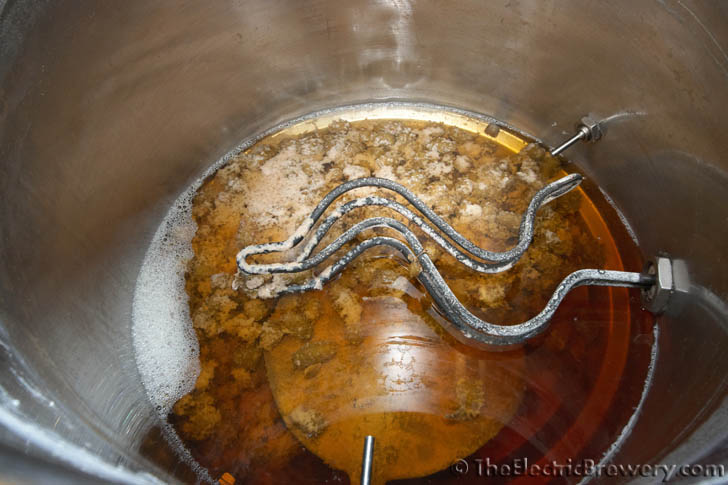 Not the answer you're looking for? Browse other questions tagged wort finings shelf-life or ask your own question.

3
How does the carbonation method affect shelf life?
9
Cold Crash and Finings
7
5 gallon keg life?
2
how well to strain wort after boil
5
Can gelatin strip away aroma and flavor?
1
Can one use gelatin while force carbing, or will CO2 keep gelatin suspended
0
Is it a good idea to use finings on Belgian Ale?
0
Shelf life of canned and unfermented wort?
1
Does Wheat decrease shelf life?
2
How can I determine why some all-grain wort is cloudy and if I should do anything about it?