I was talking with a fellow brewer who has been brewing for many years and found out that he does not put any liquid in his 3 piece airlocks. He claims that next to nothing can get in even without the water that there so he just stopped, and he claims the water is just to see the gas coming to to show that it is fermenting.

Is liquid actually required in the 3 piece airlocks?

note: his beers always taste great and never seem to get infected.

Passive environmental dust/contaminants wouldn't be able to get through a 3-piece airlock, no.

More active actors (fruit-flies, spiders, ants, &c.) would; liquid would be an effective deterrent to them.

As mentioned, gas exchange would be possible w/o liquid. During active fermentation, there's enough pressure from the produced CO₂ to prevent this very effectively, but once fermentation subsides, the air will begin to mix/normalize with the CO₂ in the headspace. The relatively small area of the airlock stem would limit this pretty effectively, though, I would think.

Liquid in the airlock is required if you want an airtight seal. 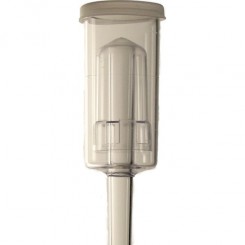 Not the answer you're looking for? Browse other questions tagged airlock or ask your own question.

6
airlock ran dry, should I be concerned?

12
Homemade airlock
3
Forgot 1 piece to a 3 piece airlock, is this recoverable?
5
Is it normal for one side of a two-piece (s-shaped) airlock to be empty during fermentation?
14
Airlock: vodka, water, or
2
Airlock and Stopper Rocket
3
Airlock has a bug inside
5
Airlock sucking inward
3
Airlock won't stay in carboy
2
I forgot to put liquid in my airlock!
0
Is Fermentation without airlock possible in bottle?