How do I set up a Sestos D1S temperature controller?

I have tried autotuning, manual tuning, and simple manual mode. None of thes has worked properly. The only thing which does work is On/Off mode, although it seems to only switch off about 2 seconds after the temperature has gone past the set point. 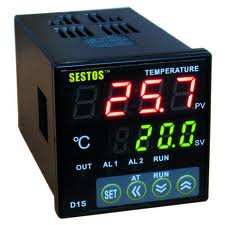 How do I set up the time period?
Since the kettle heats up very quickly, the time period should be very short, and preferably the duty cycle kept low. Se I set the Ctl (Control Period) to 1, for 1 second. I assumed that I would see the output switching on and off at 1Hz, but I do not. I also set the oPH to 50, meaning that it should have a maximum 50% duty cycle. However, the output stays on for many seconds.

How do I set the PID valued? According to the manual:

Can this really be correct? Where is the Proportional setting?

How do I get it to auto tune? I followed the manual and managed to make it flash 'At', which I think means it's Autotuning. However, the temperature fluctuated wildly, and finally settled, oscillating between 53ºC and 60ºC, even though the set point was 50ºC.

Added: I am using the following settings

With Ctl at 0 (0.5 second period according to the instuctions) the period is still 70 seconds.

So it looks like the control period is stuck at 70 seconds. Flicking through the settings, none of the numbers are set to 70 (or 35 or 140). So I don't think there's another setting which is controlling the period.

I have 3 of these in my brewery. During autotune, the temperature will go well past the set point in order to determine the amount the system will overshoot, and it will need to do this several times, meaning you may have to leave the unit for possibly several hours before the autotune is complete.

Autotune worked well for me, so I didn't try setting the PID parameters by hand. P is the Proportinal parameter - can also be called Differential as in the manual - the output level is adjusted in proportion to the difference between the present value and the set value. t is the Derivative. After auto-tune I get these values:

My guess why you're seeing continual power output is that you have entered the On/Off mode and oPL/oPH do not function there, since power output by definition is either fully on or fully off. Only with PID mode is output variable, and then you will see the power drop to 50% maximum specified by oPH.

As a diagnostic aid, you can get the device to show you the current output level. A short press of the SET button toggles between showing the SV and the output level percent. For automatic mode, you'll see something like "A 50" for 50% output. You can also switch the device to manual mode either by changing the run parameter, or by holding in the Run/down button, and then dialing in manually the percent.

You mention that in On/Off mode, the output is switched off 2 seconds after hitting the set point. This is probably because of the hysteresis parameter - dF - the unit switches off when the PV >= SV+dF. This is to avoid continual cycling on and off. Personally, I would have preferred if the unit switched off at the set point and then on again when the temperature had fallen past SV-dF, so the SV is the maximum temperature. The default value is 0.3C, so you'll overshoot by 0.3C before it switches off. I set dF to the smallest value, 0.1C to reduce this overshoot to a minimum.

The following below helped me to figure out the function of the 'P' component:

Assume the temperature is off by -1.0 degree Celsius of the setpoint.

Not that difficult is it?

After much trial and error with this PID, I worked out that to use the auto-tune you need to follow this procedure:

4) now set to auto-adjust mode by setting CtrL=2 in the setup menu, then allow the PID to auto-tune (this could take a few minutes, during which time the display will flash "At").

Thanks for that number example. However, I'm getting frusttrated with my controller and I had PID in my studies! If I set t=0 and P50=0 I should end up with a P-controller, rigth. But ever with P=1, I get 100% output for 10deg difference and Ctr=10. Any thoughts?

I had this exact same problem with my brewing controller. I don't have the entire answer as yet, but I have found that the ctl period will not go to a short time when the P value is a lot longer than the control period. Set the controller back to default values and it will allow 4 seconds for Ctl. (The amount doesn't appear to be linear, but is around P< ~200ctl for ctl=4. I reduced P and got the controller to do 1 second control periods and even 0.5 if I set P to 60 or less. Unfortunately, the auto-tune found a setting that worked very accurately, but had a 38 second control period that means the element could be too hot below the mash and I won't be able to use any settings to limit the heat.

Please use the following constraint:

There is a bug which causes the P value to override the Ctl value. The control periode jumps to 60 seconds if you violate the expression above for Ctl=0 (0.5 seconds) and Ctl=1 second.

Not the answer you're looking for? Browse other questions tagged equipment temperature-control or ask your own question.