I am planning on making an Octoberfest (late I know) on August 18th. Instead of making a boring old starter, I decided to spring for some ingredients and use up the Northern Brewer hops in my freezer and make a steam, which I will do on August 10th. While different from San Fransisco Lager Yeast, Wyeast's bavarian lager has very similar characteristics (and is likely distantly related) to the SF lager yeast typically used in steams.

Anyway, I'm planning on making a 1.5L starter + yeast nutrient with the BL yeast (smack pack), pitching in the low 60s for the steam. Then I am planning on top-cropping as much as I can at high krausen (24-36 hours?) off the steam, harvesting into a sanitized mason jar, and pitching that into my Octoberfest Lager at around 50 degrees.

this being my first lager, I am obviously worried about stressing the yeast, excessive sulphur production, etc., however the proprietor of my LHBS told me that it was not advisable to pitch onto an existing yeast cake. I had heard this wasn't a good idea (but not a horrible idea), as there is a lot of other material in this (dead cells, trub, etc.), but he mainly cited the fact that if you overpitch, the cells won't need to grow, and they will actually competitively crowd each other out/kill each other (!).

I am left with a few alternatives:

EDIT: someone on another site just commented that I won't be able to top crop since this is a lager yeast. aka. a BOTTOM fermenting yeast. Even if there is a krausen, it doesn't sound like it will have huge amounts of yeast cells in it. Maybe I'll just reserve some of my steam starter and do a second starter...making this entire exercise circuitous and pointless. Gotta love homebrewing!

A krausen is created mostly from coagulating proteins and high yeast activity. You may still get a krausen at ale temps with the lager yeast due to the level of activity, but in general it's hit and miss how much yeast you get from top cropping, even more so with a bottom fermenting strain.

In your shoes, I would divide the smack pack yeast between two starters and make separate starters for both brews, just as a Plan B in case the top-cropping doesn't work out. For the lager starter, start with a 1L starter, which you then step up to 2 liters - more if not using a stirplate.

Regarding harvesting the yeast, there's plenty of good adivce on the wyeast page Yeast harvesting and Re-pitching. I've snipped out some relevant info:

We recommend using an increased pitch rate when pitching harvested yeast from a previous fermentation versus laboratory grown culture. Laboratory grown culture will arrive in optimum condition for a quick and healthy fermentation. Yeast harvested from a previous fermentation is coming from rather harsh conditions. The culture can be void of sterols, enzymes, and glycogen, as well having possible poor cell membrane health. 1-2 million cells per milliter per degree Plato.

So they recommend you pitch at least twice as much as normal (I'm assuming these figures are for Ale yeast.) This means you'd have to harvest a LOT of yeast for the lager. One concern is the quality of the yeast - you don't want to be pitching a lot of dead cells since this will give the lager a musty aroma.

The page also shows how you can estimate the number of cells harvested by waiting for it to sediment. 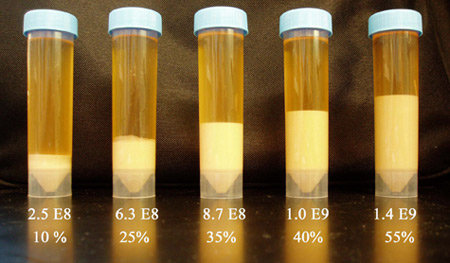 However, it doesn't look likely that you'll get as much as you need with a lager strain:

So, you might try top cropping as an exercise and as prep for any time when you really are depending on the yeast harvested, but it is best suited to Ales where lower pitching rates and less time in contact with the beer help offset the lower quality of cells harvested.

You still get Krausen, but I wouldn't harvest from the top.

I'd suggest scooping some up in a sanitized mason jar and making a starter from there after racking the steam beer to secondary. You could search google washing yeast if needed, but you should be fine from the starter. You won't get a lot of steam like flavors from that, but a huge amount of cells compared to a starter on its own.

I've pitched on top of yeast cakes before, but only ales, not largers, and getting stronger in flavor profile. I think your lager could be at risk of funny steam like flavors if you pitched directly on it.

I like this idea, a lot easier than trying to grow from a starter :).

Not the answer you're looking for? Browse other questions tagged yeast yeast-starters reusing-yeast or ask your own question.

2
US-05 Fermentation Temperatures / Top Cropping
2
Do I need a yeast starter for a 1.040 gravity wort?
3
Yeast Starter blew out!
3
What is the purpose of stepping up a starter
3
yeast cell count importance
3
Can I reuse a failed starter?
0
Should I decant my lager starter
0
Pitching a Yeast Starter Before High Krausen
2
Yeast for dubbel
2
Risks of pitching a high gravity starter?