Can you brew using a mini Yorkshire Square?

Is it possible to brew using the same method as a Yorkshire Square but at home? Since the entire thing is open to the air, it seems like it would be a lot easier to brew like this instead of spending all that time sterilizing your equipment (which actually raises the question, how does this method of brewing even work?!?) 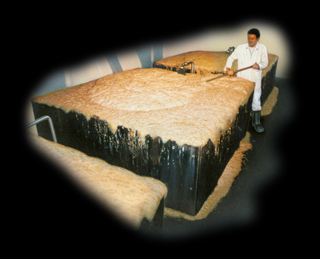 I've visited one particular brewery (not SN; this one will remain un-named) that used open fermentation, with dubious results. Judging from the open-fermentation room, their sanitation was subpar, with mold an funk on the walls. Not good. The beer reflected that, with heavy pediococcus infection in every single batch.

That's not to say it can't be done, as Sierra Nevada and notable English breweries have done, as well as some German Weissbier brewers, but you can't skip the sanitation aspect at all. I'd certainly look to having a good HEPA filter for incoming replacement air for that room.

The big brewers also have an advantage over you: Size. Per sqft of exposed wort/beer, they have several feet of depth churning out CO2, where you might have a fraction of that, so your wort might not get as much "off-flow" to push away floating contaminants.

It would be worth trying, certainly, but as said before: Sanitize very well, beware of incoming air (dust), and pitch a VERY healthy yeast starter to get that CO2 rockin' out of there as soon as possible. Whether it will save time, I question that. But you might get a slightly different and possibly better beer character in the end.

You can certainly use an open-fermentation vessel to ferment. Brewing TV did an episode on Open Fermentation, and the tasting notes. The taste of your beer will change with an open fermentation but that doesn't mean it isn't a great method.

Edit: From the comments, Sometimes the the purpose of open-fermentation is to use the wild yeast in the air, but sometimes the purpose is to allow the yeast to perform without the co2 pressure that comes from a closed vessel. You should decide why you want to use an open vessel and then prepare accordingly.

I know that Sierra Nevada uses open fermentation for their Kellerweis. However my understanding is that they have air filters that filter out any microbes.

In short. I would worry about infection. For one, whether you were open air fermenting or not, you still need to sanitize your gear. Dirty equipment makes for dirty beer. Your biggest concern would be fruit flies dropping into your beer which could result in an acetobaceter infection.

If you go through with this I would only do it for primary fermentation. 1 week if possible. And then rack to secondary.

Not the answer you're looking for? Browse other questions tagged beer primary bacteria or ask your own question.

7
How do you malt your own barley?
1
Will Adding an Active Mash to a Non-Active Mash Get Enzyme Activity Started Again?
4
Bad “Canned Meat” smell after bottling, and briefly mid-fermentation
2
Fruit Beer—Hard Time Finding the Correct Fruit
13
What are the primary causes of Acetaldehyde?
2
Thick blobs of yeast cake looking stuff in my bottles (Image Added)
6
How to get started with brewing at home
6
Using 5L oak barrel for beer
0
I can't differentiate between OCD or the smell of vinegar, and need some guidance
2
Planning brewing towards an occasion over an extended period of time with regards to storage