I happened upon a bunch of 4L glass wine jugs today while dumpster-diving for beer bottles. 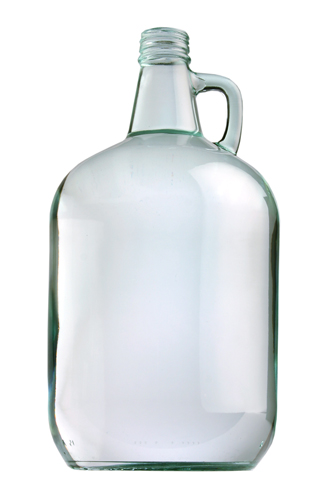 The jugs I found have screw-top lids, and I thought they could be useful as secondary fermenters. If I split up my 5 gal of beer into 5 of these jugs, I should be able to let it hang out in there for a few weeks before I bottle. These are clear glass bottles, but they would be stored in a dark crawl space, so I shouldn't have to worry about skunking.

Does this sound like a reasonable plan? Is there some problem I might encounter by having the beer in multiple locations (e.g. oxidation)? Or could there be a problem with the screw-top lid?

Use the jugs for propagating yeast instead. By pitching super fresh and healthy yeast, you'll find that the need for finings goes away. Hence the reduced usage of secondaries amongst many homebrewers these days. Healthy yeast tends to flocculate out much better than so-so yeast.

I don't use finings, so I can't speak to how that works. But I've found anytime I've had to split an ingredient over multiple containers that it's very difficult to do so evenly. Some of your jars will get more finings, others will get less.

However, I would recommend hanging on to these jars, they are useful for other brewing tasks. You can split a batch of wort into the jars and give each its own yeast. You can make a gallon of star san, cap it and store it for long periods of time. Etc. Etc.

I wouldn't advise it.

The current thinking in homebrewing circles is that it's best not to transfer to a secondary unless there's a good reason to, like for example adding fruit and doing a further fermentation.

If you are going to use a secondary, I think you're much better off using a single one, rather than 5. I think you'll pick up a lot more oxygen with the 5. I'm thinking that you pick up the most oxygen during a transfer at the start, when the outlet end of the tube is not submerged. So with tranfering into 5 jugs, you're going to get that happening 5 times instead of just one.

Carboys are cheap. Just get more.

I would also use my normal carboy unless you had a reason to split. I have several of these myself. I bought them when I did a split batch experiment (split one beer into 5 and dry hopped with different varieties). It worked out fine.

I agree with the others about oxidation though, be careful when transferring.

Not the answer you're looking for? Browse other questions tagged secondary or ask your own question.

7
Clarification for a low-flocculating yeast