Should I worry about blow-off?

I brewed a batch of IPA yesterday and when I checked on it today it had started to blow-off. There is so much pressure in the primary that it has spilled up through the airlock and is constantly whistling. Should I be concerned about this? Is there anything I should do to correct it?

The modification was to use liquid malt extract instead (10 lbs) and substituted Wyeast 1056 (American Ale) and was made at the recommendation of my local homebrewing store. 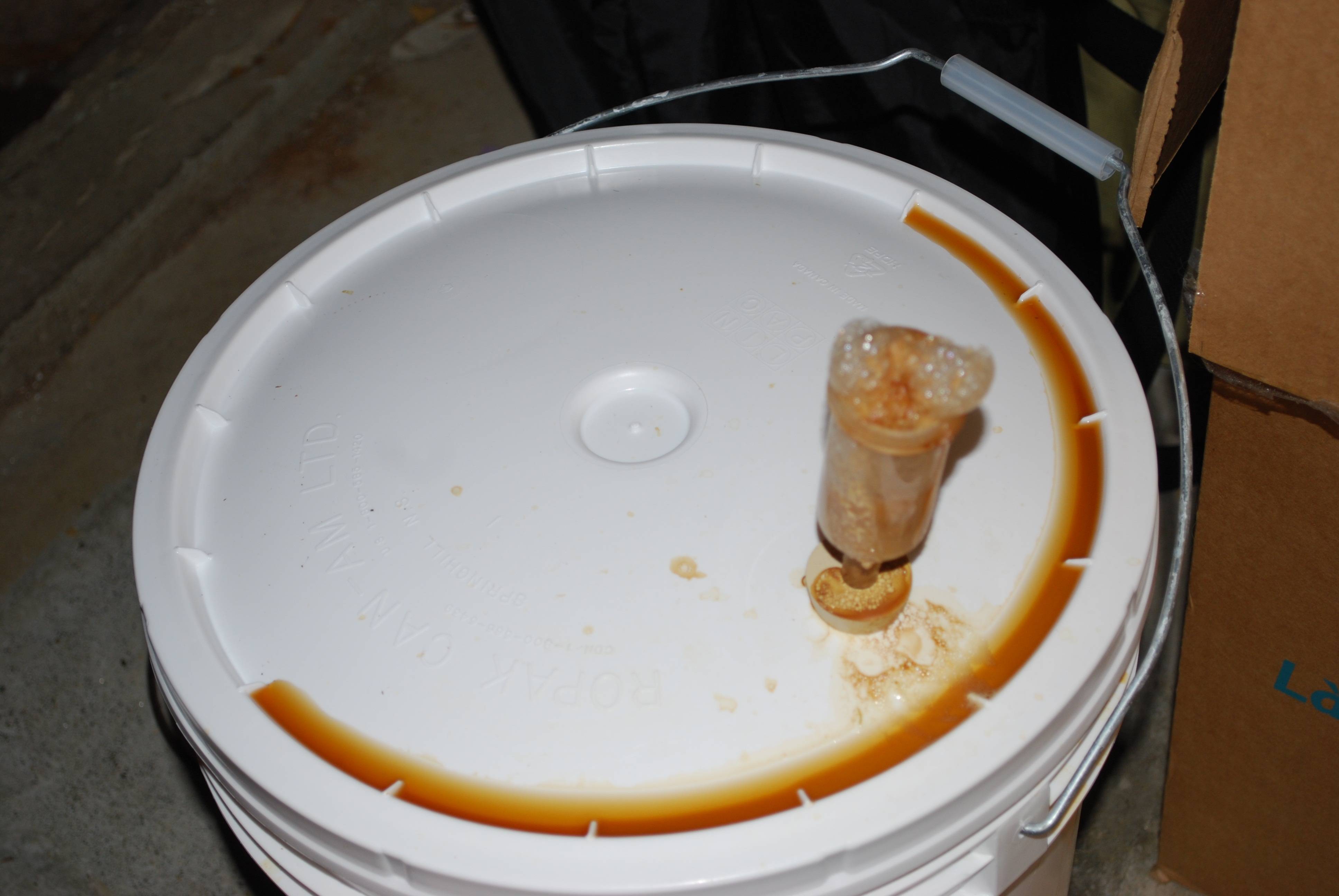 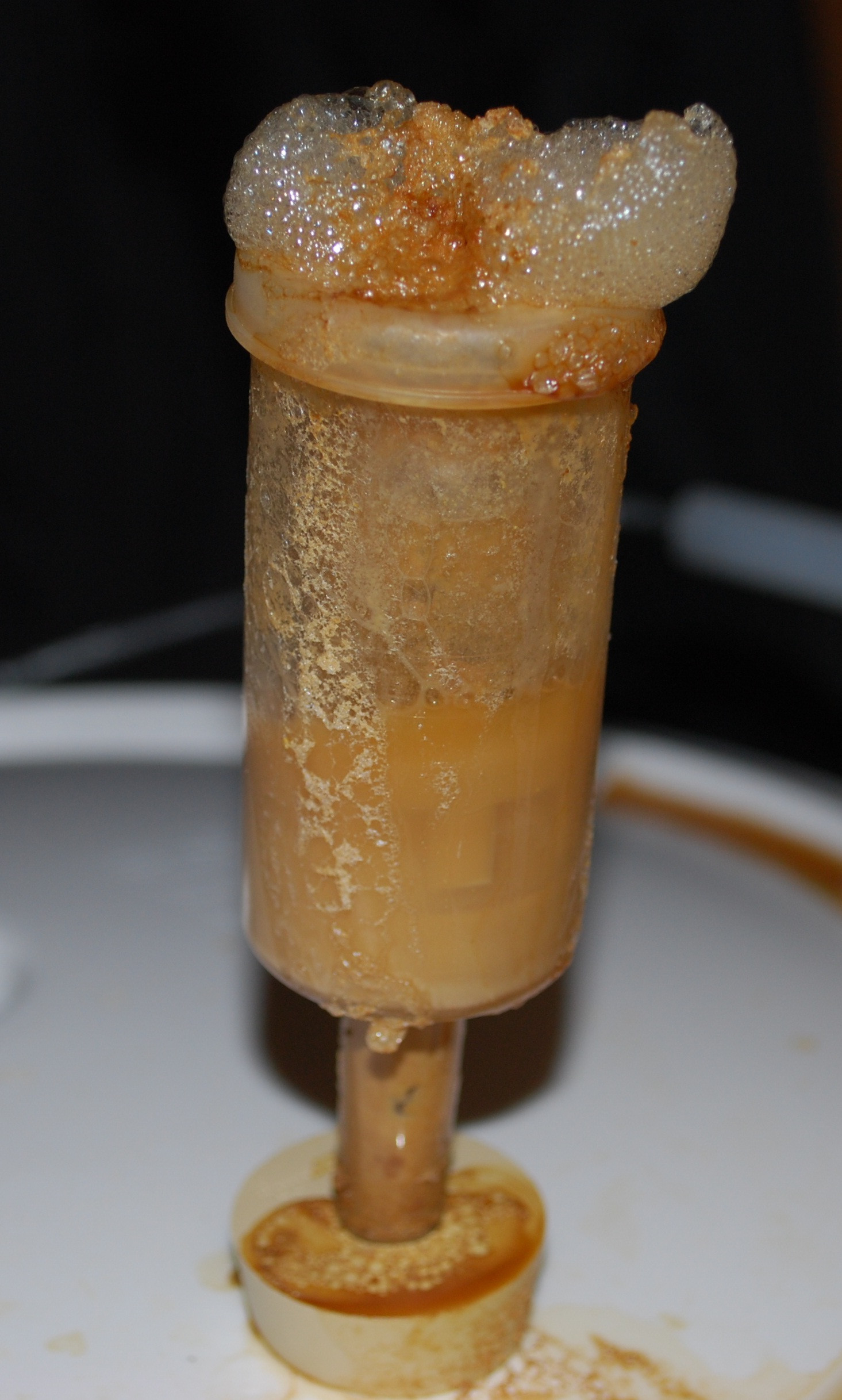 You're experiencing a "blow-off". Often, people will replace their airlock with a "blow-off tube", usually one with the same OD as the airlock so it can fit in the same hole on the lid. The worry with continuing to use the airlock is that … especially if one of those airlocks has residual plastic across the bottom of the post that fits into the grommet on the lid of the bucket … the airlock could itself become clogged (with trub or hop material) and create a high-pressure situation that would eventually breach either the airlock or the lid, and send beer flying everywhere. Better, instead, to redirect the blow-off krausen through a tube into another water vessel, creating a large-scale airlock, and one that contains all that blow-off matter for easy cleaning.

In any case, clean the external surfaces, and the airlock, and replace it, or replace it with a blow-off tube.

("Wild" fermentation generally refers to using the natural (wild) yeasts in the air to inoculate your wort instead of a controlled yeast addition.)

Aside from the mess it seems fine to me. Remove and clean the airlock. Resanitize the airlock and put it back in the lid.

You just have a very good ferment. 10lbs of LME in a 5-6 gallon batch is a lot, so its not a surprise to have the aggressive ferment.

Could be that the warm summer temperatures are creating a more vigorous fermentation than you're used to. Aside from the problem due to blow off described above, I'd be a little worried that the temperature of the fermenting beer has gotten too high. Ale yeasts produce the cleanest tasting beer at temperatures below 65 F. Above that the yeast produces esters, giving the beer a fruity character that's not appropriate to many styles.

That being said, given the aggressive hop schedule of that recipe, I doubt you'd notice a slight increase in ester formation.

I've had good results putting my primary fermenter in a water bath and even adding frozen bottles of water to keep the temperature down. No point in doing this for the batch you're brewing now, but for subsequent batches, you might give it some thought.

Vigorous fermentation is good. But loosing beer is bad. As suggested, for this batch, just keep cleaning the air lock. There are some things you might try on your next batch:

I have had air locks shoot literally to the ceiling, but that was before I started keeping Fermcap-S on-hand. Note that used in the fermenter, Fermcap-S increases the bitterness of your beer (retained IBUs) by about 10%.

If you have a length of 1/2" I.D. hose, you can make a blowoff hose by incorporating the three-piece airlock. Just take off the airlock cap, remove the dome, and you'll find that the 1/2" I.D. hose fits perfectly on the airlock's center tube!

When the airlock becomes significantly fouled, like in your picture, it's probably best to remove it and give it a quick cleaning and re-sanitizing before attaching the blowoff.

If you catch the blowoff geyser early enough, you can just slap the tubing in there straightaway, leaving the airlock in place.

This happened to me and the wort that was in the airlock dried and enough pressure built up inside the fermenting bucket that it shot the airlock off hitting the 8 foot roof leaving a nice mess on the roof, wall and floor. Otherwise the beer was still good.

Just clean it out and place it back.

Since then I have been using a blow off tube with its end in a bucket of water. This way it never can make such a big mess.

Not the answer you're looking for? Browse other questions tagged fermentation primary blow-off or ask your own question.

12
What is a proper blow-off tube setup?
4
Beer Lost Through Blow Off Tube
4
Airlock re-sanitization after minor blow-off
2
First Time Airlock Won't Start
1
Will this fermenter explode?
0
missing blow off water
1
Should I worry about this smell?
5
Mold growing on blow-off tube water -- batch ruined?
2
Re-adding yeast after a blow off
4
Ale Popped the Bung