I'm a newbie brewer currently trying his luck with an irish red ale kit. I've followed the instructions (which weren't complicated since it's a kit), and I've let it brew for about 6 days now (instructions claim 4–6 days to completion in 18–20°C).

First question: The inctructions say the ale should read constantly below 1.014° when it's done, but I measured it to a bit above 1.017° both yesterday and today. I checked the temperature today, and it was 17°C. I don't think I've treated my yeast particularly well temperature-wise; the weather here and my lack of any real temperature control has probably lead to temperatures between 16–22°C (it was probably too warm when I began brewing, and too cool the last couple of days).

So I'm wondering: Should I heat it up to 20°C and let it sit a couple of days to be on the safe side, or should I accept the slightly higher gravity reading and just bottle it?

Second question: I noticed that after the krausen disappeared, there are theese brown "floaters" on the surface (I'll add a picture), almost like some of the dry yeast clumped together. Does this look normal, or did I manage to get an infection on my first attempt at beer brewing? (It doesn't smell off at all, if anything it smells surprisingly sweet, almost wine-ish.)

I'd appreaciate any input. Thanks in advance! 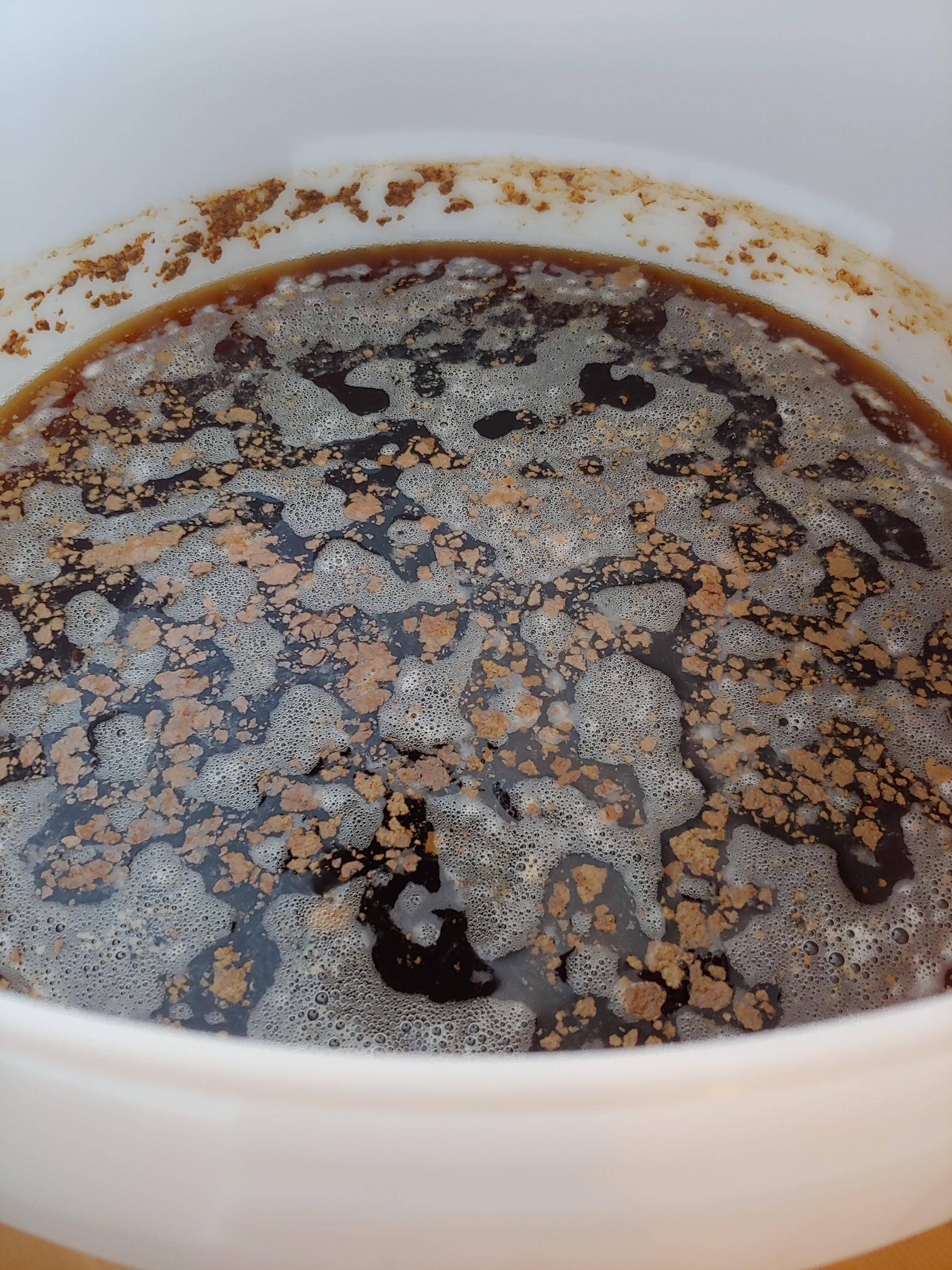 Edit: As a final update, I thought I'd post how the beer turned out. After leaving the beer alone for quite a while, the gravity remained stable at 1.015°. I've no idea why the FG ended up too high. (Thoughts, anyone?) Anyway, I bottled the beer with carbonation drops and let it sit in my basement for about two weeks before finally tasting it.

The beer turned out pretty good, though a bit too malty. It carbonating nicely, ruled out dead yeast as the culprit for the high FG. Another week later, the beer tasted even better and not as sweet; it seems another week in the bottle did wonders for the taste (patience coming back to bite me in the arse again). It has a nice fruity character, but is still bitter enough to keep things balanced (at least after the third week post bottling). I'd describe it as interesting and refreshing, and it has a pleasing tawny red colour.

All in all, I'm a very happy brewer at the moment, and I look forward to my next batch (a helles lager). For those of you who are interested, I used the St. Peter's Ruby Red Ale kit. Happy brewing, folks!

That beer definitely needs more time. It's likely that the periods of lower temperature slowed or potentially even halted fermentation, and the sweet smell you describe is probably unfermented sugars in the wort. You just need to warm that brew up a bit (19°C as you've said there is perfect) and wait another couple of days at least. At best, bottling now will give you a sweet, green-tasting beer - and at worst, bottle bombs.

It also doesn't look infected to me - that just looks like standard yeast rafts. If you haven't stirred it already, I'd simply warm it and leave it alone. From the appearance of the brew, the yeast is still suspended and stirring will simply introduce the possibility for oxygenation. If you do stir, try and minimise any splashing (and as hard as it is to resist peeking, try to keep the lid on the fermentation vessel too).

I've seen it said that patience is one of the hardest things for new homebrewers to learn. I don't know about anyone else, but it definitely was for me. Just warm it up, relax, give it a few days (or even a week) and then take another reading. And if you're still concerned about infections, give the sample a smell and taste - if it doesn't smell or taste sour or otherwise off then it's almost certainly fine.

Not the answer you're looking for? Browse other questions tagged yeast temperature contamination ale final-gravity or ask your own question.

5
Should I brew in too-warm climate or substitute the yeast?
1
Didn't reach target FG, pitched more yeast, gravity same after a week. Should I just bottle already?
0
Should I be disappointed?
0
Lagering an Ale
4
Didn't get the expected O.G
5
Adding yeast to secondary
3
Temperature when hydrating dry yeast
0
I can't differentiate between OCD or the smell of vinegar, and need some guidance
3
How do lager kits let you brew at room temperature?
0
What possible reasons cause a (pale) beer to fail to carbonate in the bottle