I've brewed my first Citrus-flavored beer last week, using American Citra hops and I'm curious - what gives the hops a Citrus flavor? Is it natural? Or rather inserted artificially when the hops is processed?

Thanks in advance, Idan

I happened to have "The homebrewer's companion" on my desk when I read your question, so I quickly checked in it, and it says the following:

These compounds are the part of the oil which will gave aroma. When we look for these exact key words, we find multiple articles, this one was interesting to explain a bit what exactly would bring which aroma.. Hop Aroma and Hoppy Beer Flavor: ChemicalBackgrounds and Analytical Tools from the Journal of the American Society of Brewing Chemists

To understand why the Citra or Cascade taste citrus, then we need to understand if we have more Citronellol in them, and why? Reading more articles about it, the most interesting to me was Screening of Geraniol-rich Flavor Hop and Interesting Behavior of β-Citronellol During Fermentation under
Various Hop-Addition Timings

In previous studies, we focused on biotransformation of hop- derived monoterpene alcohols (linalool, geraniol, β-citronellol, nerol and α-terpineol) (Fig. 1) and their contribution to the flavor of hopped beer. As a result, the β-citronellol was almost absent in hop and wort and gently increased during fermentation, because of the biotransformation from geraniol to β-citronellol by brewing yeast. Though, in general, the geraniol drastically decreases during the first 3–4 days of fermentation, the concentration of geraniol and β-citronellol in beer could be enriched depending on the initial geraniol content in the wort; for example, by using geraniol rich hop Citra.

As shown on this figure, the Geraniol, while mixed with yeast, will disappear and produce Citronellol 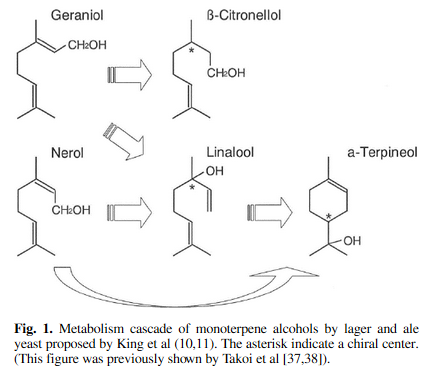 And it happens that Cascade and Citra contains plenty of Geraniol: 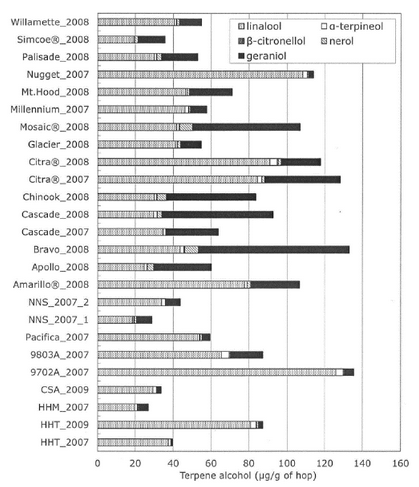 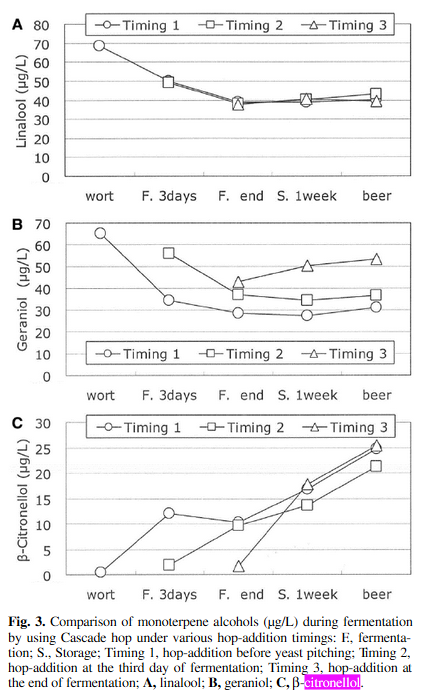 Which was interesting to me, as in my mind Citra or Cascade would produce the most citrus flavor if used for dry hopping instead of boiling. So a last point worth mentioning, is that apparently the precise combination of what you find in Citra will make the citrus taste stronger:

Which would explain the efficiency of dry hopping as the best time to have as much possible of the three elements is at the end of the fermentation.

Citrus flavors and aromas are naturally occurring in many hop varietals, especially in hops developed and/or grown in United States, Australia, and New Zealand. Grapefruit character is most common, as well as lemon, orange, tangerine, lime, etc. Cascade was one of the original known citrusy varieties. After Cascade gained in popularity in the 1990s, many others followed suit. Citra® hop is a newer and more complex hop with a lot of citrus as well as "tropical" mango, pineapple, and "cat box". This is all natural. Fruit may be occasionally added to a few of these beers, and in these cases hopefully the brewer is telling you that they did so, but by & large this is all naturally occurring.

Not the answer you're looking for? Browse other questions tagged hops citrus or ask your own question.

2
Two part question on my first brew batch
0
Question about hop schedule and BIAB
1
Which hops should I use (and how should I use them) for bittering without aroma or flavour?
1
Citra hops shortage?
2
Tea-like aroma in my beer
1
Which hops to choose for a hop tasting
3
Dry Hopping Question
3
What hop will give me grapefruit-like aroma?
3
Hops substitutions for Amber Ale
1
First brew - OK to substitute malt/hops, and how much water should I be boiling?