How long does clarification take given a refrigerator temperature level cold crash?

In this question defining cold crashing, there is some discussion of ramping the temperature down slowly over a long time, but then says quicker cold crashing is possible if the beer has already completed fermentation.

In this question, I'd like to explore an appropriate, quick, and effective cold crash technique on an ale that's had plenty of time to ferment and "clean-up". And for this example, the purpose of cold crashing is primarily for settling.

Given the carboy is in a refrigerator which is turned on normally (no external temperature control), it will take some time for the heat to be removed from the volume of beer. If the beer started at, say, 68F, with the refrigerator "on", there would be a ramp down, and within 6 hours, the beer would be at, say, 40F. Then you'd wait Y hours as settling continued.

Note that in this diagram, I have assumed that settling happens faster earlier, and slower later. This may or may not be your experience (could be linear). The blue line is the temperature of the beer. The black line is the amount of settling over time, starting at no cold crash settling and ending when 90% of the eventual possible settling is done. 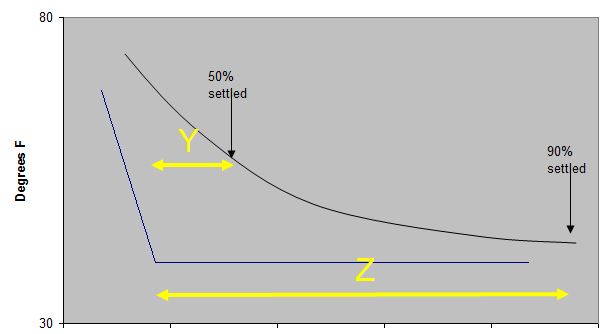 For cold crashing we go from tank temp to 4C in about a day, that is due to the limitations of our cooling plates and chillers. If we could drop a tank from 18-20C to 1C in 12H I would take that. ~1.5C/H gets the yeast to go to sleep and drop out.

Anything below 4C and even using a lager yeast it will be effectively stopped, and starts sedimenting out.

Y and Z are going to depend on a number of factors such as flocculation rate of your yeast, are you at FG or crashing 1 or 2 points above it so you don't have to prime back for packaging, how deep is your FV, a 10HL 3.5m FV takes a bit longer to drop clear than a 50l/10 gal FV, but likewise a tall 50l vs a squat 25l will have different values.

But, for arguments sake in a 50l FV at FG, with a standard ale yeast you are crashing down to 4C in a day, I would expect for most brews Y <1day, and Z to be 2 days.

2 days in a small FV at <=4C will drop out most of your yeast, heck most should be out already if you are at FG.

Since this question involves estimation and I haven't actually run the proposed experiment myself or recorded specific data, I'll take my guess based on what I think I might know based on 20 years homebrewing experience. To be "clear", what I personally would be aiming for is not to settle out obvious chunks of yeast and hops, but rather the finest sediment that changes the beer from a slight haze to the point of brilliant clarity. As I bottle my beer but do not have an enormous refrigerator and thus can only refrigerate a few bottles at a time, I experience this after a bottle has been moved from the basement at about 60 F (16 C) to the refrigerator at about 40 F (4 C) for a period of weeks. Brilliant clarity is a rarity for me except when the bottle has been in the refrigerator for a long time. So, my estimates for 90% brilliance vs. 50% "clear":

Of course, this is just an estimate. Anyone interested should run an experiment to support or refute.

Not the answer you're looking for? Browse other questions tagged conditioning cold-crash clarification packaging or ask your own question.

25
What is cold crashing?

3
How to Cold Crash an Imperial Stout?
10
Why exactly does cold crashing work?
0
Benefits of cold crashing vs risks of moving fermenter
1
Neglected to Cold Crash after fermentation
6
Long cold crash for an ale. Benefit or harm?
4
cold crashing question
0
Would an extended time cold crash at 10°C work or not?
3
Cold crash amount of CO2 sucked into fermenter
1
I'm cold-crashing in a corny keg, in a fridge. I want to take some away in bottles in about 48 hours. Can I carbonate it at the same time?