What caused my wort to be this cloudy, and how can I get it to clear?

I recently did two experimental all-grain gluten-free batches, and got some strange results; so much sediment that it looks like milk! Initially, looked about the same, and I thought about running through a filter, but decided to see if it would settle at all. After 5 days, this was the result. These do not have yeast in them, as I decided that I might filter and re-boil.

To the left is Batch 2, the shorter mash with the longer cereal cooking step which looks like rice-milk with only an inch or so clear at the top, to the right is Batch 1, which was the over-night mash. It looks almost normal now, but the trub layer is thicker than what I am used to seeing come straight out of a kettle... (Albeit this is only my third all-grain brew...) 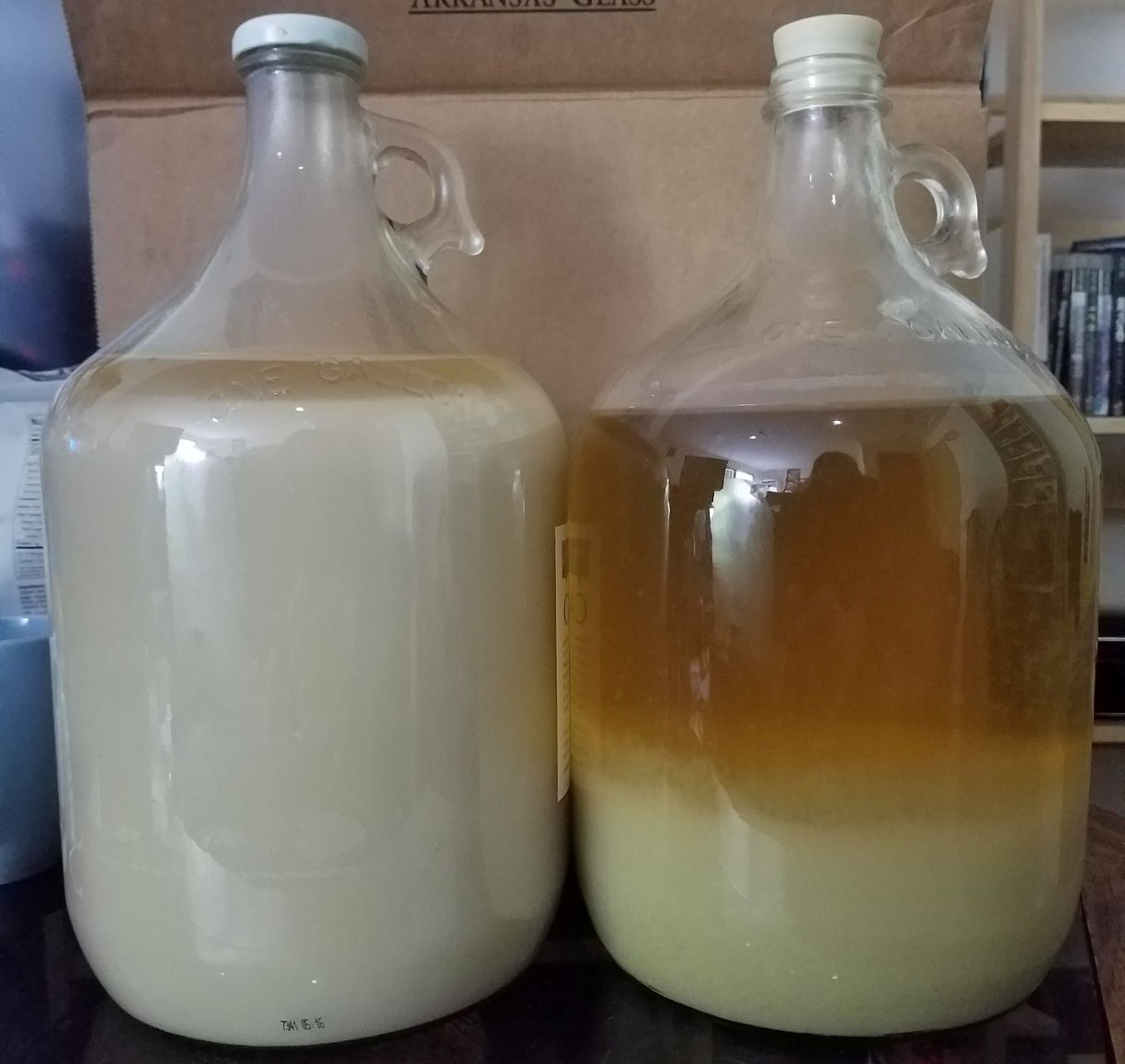 My questing is what could have caused these (especially batch 2) to be so ridiculously cloudy? I am guessing this might simply be small flour particles, but then why would batch 1 be clear of them? Is it possible the higher temp of cooking in Batch 2 extracted more protien? Is that related to the high gravity reading?

Perhaps my temperature control temperature on batch 2 was lacking, or the enzymes are not as potent as stated and failed to achieve complete conversion of starch? Could this result in cloudy wort? Why would the gravity reading be the same then?

A second question would be how on earth can I filter this? A coffee filter would surely just clog right up, and this stuff is so small it can go right through a fine mesh bag like it's nothing. Is there any practical way to filter these? Is it possible that after fermenting, the whole thing would settle out somehow? Maybe it just needs more time? Like months?

-Details- For any possible relevant details I can think of... Here's the whole process. (These are 1 gallon batches.) 10 oz white rice 13 oz millet

Grains were not malted. Ground in a bur grinder set to it's most course setting, which resulting in a mix of particle sizes from what looks about corn-meal size down to very fine flour.

2L of 'strike' water was used. (About 1.5 qt / lbs) In both cases, the mash became thick and hard to stir before enzyme was added, and thinned very quickly afterward.

The enzymes are SEBAMYL BAL and SEBAMYL L. According to the seller, they are best used together in a "Reverse Step Mash", adding BAL first at 165, then adding L later at 145.

The mash is where the two experiments diverge.

Batch 1: Kettle on stove, keeping burner on very low to maintain temp. Raise temp to 185 F, stir and cook for 20 minutes. Wait for temp to lower temp to 165F, then add first enzyme. After 60 minutes, lower temp to 145 F and add second enzyme. I started doing did iodine tests after an hour, and after 2 hours still had indications of starch. I decided to let it go overnight, using an oven to hold it near 145. Iodine test still turned purple. Wort looked thin and tasted sweet though, so I decided to continue anyway.

Batch 2 was done in an InstantPot pressure cooker, generally leaving heat off and relying on it's insulation to keep temp. Same grain & water etc. Cook at 212 for 30 minutes, stirring constantly. Cool to 155, then slowly raise to 165. (To help ensure temp reading is correct.) Added first enzyme and leave for an hour. Cool to 145, add second enzyme, and hold for 2 hours. This also failed the iodine test, turning dark purple immediately. I figured the iodine test might be picking up flour particles, so I decided to ignore it and call the mash done.

The 'sparge' step was the same for each. It was just me pouring a measured amount of warm water over the grains as they sat in a nylon mesh bag over a pot. This was done to help recover some of the sugars that would otherwise be lost between the grains.

After this, I took gravity readings of each using a hydrometer. Samples were taken from each kettle and cooled to 68F (the hydro's calibrated temp.) Both read 1.045, which is really weird to me, because I was expecting 23 oz of grain to yeild at most 1.025, of sugars...

Added hops (pellet, but kept in muslin cloth bag), boiled both for 60 minutes, added about 1/4 tablet of whirlfloc in the last 10 minutes, chilled with immersion chiller, then racked. I did not add yeast, because I immediately noticed that they were both way too cloudy.

Yeah that's starch alright. Add more enzymes, either at room temp or below 155 F. I would expect enzymes to denature fast at 165 F. Might need to leave the enzymes in overnight or even for several days? I'm not sure how long as I've never done this. Only boil after the iodine test comes out negative.

No use in filtering with that much starch in there. Gelatin might remove some minor haze, but probably not THAT much.

I wish you the best, hope this works out for you.

Not the answer you're looking for? Browse other questions tagged all-grain mash cloudy gluten-free or ask your own question.

4
Effects of Grain Freshness on Brew House Efficiency
6
Should the grain or strike water be added to the mash tun first?
10
How can I clear-up a cloudy cider?
7
Do I need to continuously measure the temperature of my mash tun?
0
Step Infusion question
2
How can I determine why some all-grain wort is cloudy and if I should do anything about it?
4
Brew in a bag - mash temp all over the place
3
Odd mash schedule
1
Poor mash efficiency part 2