My buddy works at a community garden, and they have a fence full of Cascade ready for the picking. He estimates a few pounds of hops are on the fence.

What has to happen between him picking them off the vine, and me putting them into my boil? How do we get the hops ready for brewing?

I think I'm going to do a Pale Ale with the one hop, a la https://homebrew.stackexchange.com/questions/1390/hop-schedule-for-single-hop-ale-brewing

You can use them fresh or you can use them dry. The easiest way to dry them is to lay them out on a screen in a warm attic. Getting some air circulation is even better though. So you can stack them on some window screens (cleaned first for grim) over a box fan on low and pull air through them.

Those are my ideas.

I brewed a freshhop IPA last year in which I piked the hops and 10 minutes later they were in my brew kettle. Freshop ales have a slightly different character than ales brewed otherwise-- they're a bit more resinous sometimes, but are really nice and have a great hop character. You have to use more hops by weight though-- the extra water throws off measurements. Still, brewing a freshop is highly recommended.

Otherwise, I'm planning on using a food dehydrator this year with the hops leftover after brewing another freshop... that is, unless I read something here that sounds like a better plan.

My measurements for a freshop aren't the most scientific... I used this many (see photo) for the flavor hop addition (20 minutes in the boil) and then a few more handfuls in addition to a healthy dose of purchased hops for bittering and aroma. The rest were simcoe and amarillo that I purchased. 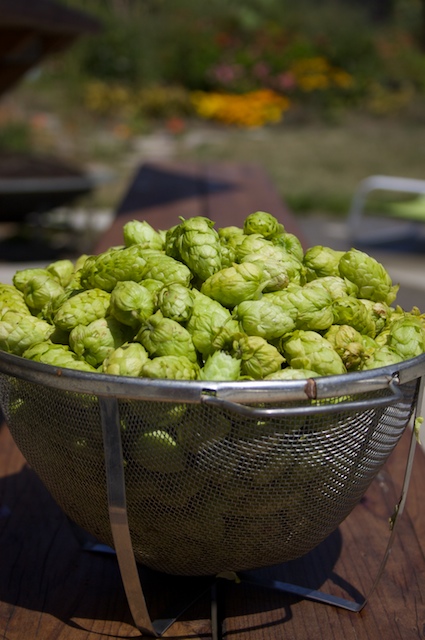 Not the answer you're looking for? Browse other questions tagged hops or ask your own question.

8
Hops in the compost?
5
Picking hops very late
4
When modifying a recipe, should you scale hops based on alpha acids?
0
"Self-Processing" Hops
2
Online hops reference
2
Leaf Hops to Pellet Hops
4
Do you need to boil un-hopped extract?
1
First brew - OK to substitute malt/hops, and how much water should I be boiling?
1
Is this an okay recipe?
3
Hops comparison resource