Starsan in double bubble airlock keeps getting sucked into fermenter - why and how to prevent?

I did a brew on Saturday and cooled, got in the fermenting bucket and added yeast, added starsan to the chamber in the double bubble airlock and got it under the stairs. Ever since then, the starsan gets sucked into the fermenter, fairly quickly as well (after I replace it). I've heard this is due to temperature change creating a vacuum. I've also heard that that shouldn't happen with this type of airlock. Its not happened before to this extent (i.e. I've never had to replace the starsan).

Any ideas why this is happening? And is there a way I can prevent it? I'm not too concerned right now as the yeast is still working and producing carbon dioxide but when it finishes I still plan to leave it (three weeks in total) so I don't want the possibility of oxygen getting in.

This is caused by a drop in temp before co2 is being produced. Just cap the fermenter in sanitized foil until you're past the lag phase, or cooled to fermentaion temp. Though a little bit of starsan won't hurt much, foil is better than an open airlock IMO.

I don't put air locks on until the wort is at fermentaion temp. I also remove the airlock then foil cap when cold crashing to prevent the same issue.

You're putting too much liquid in the bubbles of the airlock. If each side is only filled about one-third, none of the liquid will either be sucked out or blown out. 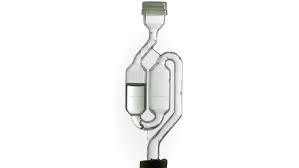 Also, as barking pete has answered, you might as well just fill the airlock with water.

In the comments below Wyrmwood says:

The pressure in a fermentation chamber with a good seal after moving from ale temps to a fridge to cold crash is plenty to empty a standard airlock or to suck a half-filled quart jar dry with a blow off tube.

My reply is that sure, it could suck fluid out of a blow-off container through a blow-off tube, but no, it won't suck the fluid out of properly-filled airlock such as the one pictured here. It will suck air through the fluid, but the fluid will be left behind.

One sensible suggestion is don't put starsan in the bubble trap - just put water in there. There is no need to use an antiseptic in the air lock.

I use vodka in my airlocks, you know, just in case it gets sucked in.

Not the answer you're looking for? Browse other questions tagged fermentation beer yeast techniques airlock or ask your own question.

8
Is There A Way To Get Root Beer Taste/Smell Out Of Kegging Equipment?
3
Rescuing a weak lager fermentation
1
Airlock started bubbling after racking into secondary and dryhopping, why?
1
Slow Fermentation in cider
1
Wine fermentation without yeast?
4
Why are some of my batches too sweet in the bottle, and can I rescue them?
1
How to troubleshoot for either bad wort or bad yeast?
3
Three days into fermenting beer and getting really sharp, bitter flavors, will that mellow out?
0
When to rack my bubble-less cider and can I rack it into a bag in a box?