Will a 50 feet copper immersion wort chiller chill twice as fast as a 25 feet?

I was thinking that once the water has absorbed all the heat it can, it doesn't matter how long it will travel in the tubbing. So what is the ideal length ?

No unless the 25' is the maximum submerged surface area possible. Even then a 50' half submerged would only function as 25' anyways. Half the length of tubing would never be twice as effecient of a tubing with same diameter and liner surface area.

Ideally you will have as much submerged surface area as possible.

That being said. If the temperature of the coolant exiting to coil is the same as the wort then it's accepting 100% heat transfer. This is what we all shoot for.

Diameter and shape can drasically change heat transfer and the amount of coolant it can move. For example 1/2 convoluted tube has much more transfer than regular tubing, but slightly less total volume capacity at the same pressures. 1/4 inch tube opposed to 1/2 inch will reach 100% thermal exchange in half the length of tubing but at the cost of 50% the coolant volume being able to move.

Finally All brew systems, coolant temps & flow rates are different. The more coolant flow and coolant wort temp differential have up to the point of coolant exit temp = kettle wort temp the better.

So to say that 25'f v 50'f is better, may be the case on some systems. Use the basics if provided and make your own conclutions.

Summary: Immersion chillers have diminishing returns on length. The first foot of tube does more work than any other foot of tube. The last foot does the least.

The immersion chiller transfers heat from your wort to the water flowing through it. The image shows cold water entering an immersion chiller at the top. As it flows through the tubes it heats up and hot water leaves from the bottom. 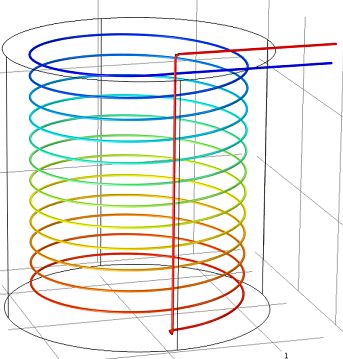 I stole the image from someone who did way too many pointless simulations about beer brewing. He doesn't explain exactly how they work, and I think he got a few details wrong. Because the rate of heat transfer between the wort and the water is proportional to the difference in temperature between them, the cold water at the top of the chiller is transferring heat more quickly than the hot water at the bottom. Therefore the difference between water and wort temperature follows a exponential decay as it travels through the chiller. The closer the temperatures are when the water exits the chiller, the more efficient your chiller is.

The graph shows an example of what this might look like for a hypothetical 100 foot chiller. The cold water enters at 60 degrees and heats up to the temperature of the boiling wort as it travels through the chiller. The form of the equation is correct, but I basically just made up numbers as examples.

The biggest change in temperature is in the first 25 feet of the chiller. The second 25 feet is useful, but not as much as the first 25. The last 50 feet are not particularly useful. I have a 25 foot immersion chiller. My chiller water exits the chiller significantly cooler than the wort, but hot enough to get the job done. If I had a 50 foot chiller, it would come out slightly cooler than the wort. If I had a hundred foot chiller, I would be wasting my money.

In an immersion chiller length is not the only factor. More water can flow through a larger diameter pipe, but the heat transferred per unit of water is lower. This generally means you cool your wort quicker, but you use more water. Convoluted piping has slightly more resistance to water flow, but considerably better heat transfer. Usually this is a net win. Running a coiled wire inside your tube is a poor mans way of getting the effects of convolution. Stirring your wort continually while the chiller is running can improve your efficiency, but also means you will have more trub in your fermentor.

A counterflow heat exchanger is the most efficient type of exchanger. This quora answer does a pretty good job explaining why. I recently switched to all grain brewing, which requires a full boil, and therefore more cooling power. My next project is to convert the copper tube I call an immersion chiller into a counter flow heat exchanger. When I priced out all of the fittings and tools, I found it would be a little more expensive than buying another 25 feet of copper pipe.

In theory yes, but for most if not all homebrewers it's technically not feasible. Why? The total heat exchange, in this case, is a sum of heat exchanged by conduction and convection. The conduction part, roughly saying, is only a function of coil material , temperature difference between the surface and the bulk fluid (dT), surface area and specific heat coefficient of the liquid flowing through the chiller. The convection portion is a function of surface area, dT and convective heat transfer coefficient. The last one is a function of velocity (m/s) of the liquid. So, increasing the velocity of the liquid being pumped through the chiller will increase the transfer of heat.

For your second question I would say that there will be an optimal length for each dT, if we keep the flow inside the chiller constant. Since we can´t change the length of the chiller for every temperature drop, the alternative would be to control the velocity of the liquid being pumped through the chiller.

In practice, I try to keep the dT as big as possible and slowly move the chiller in the hot wort (increasing the convection portion).

Not the answer you're looking for? Browse other questions tagged chilling wort-chiller or ask your own question.

4
Optimal counterflow wort chiller
16
How fast should I run water through my wort chiller?
3
Chilling wort using ice packs
7
Is there any trick to draining the water out of an immersion chiller?
1
Plate Chiller Use
2
Chilling wort in a fridge
4
Using my immersion chiller in ice bath instead of wort
1
Chill the wort faster by applying convection (by putting it inside a laundry machine)?
3
Wort chiller length, will 30 feet work for a 10 gallon batch?
1
Do I need heavy duty Hose Pipe for Immersion Chiller?