Late hop transplant to the ground - thoughts on trimming?

This is a Cascade hop I planted in a pot in late April or early May. I had a lot of travel and left it a little longer than I intended. I recently transplanted it to the ground with some bonemeal. It only had two shoots at the time. Now it's shooting out new shoots.

Should I just trim these shoots? I tried to train the original two shoots up a bamboo pole, but they don't seem too active now. 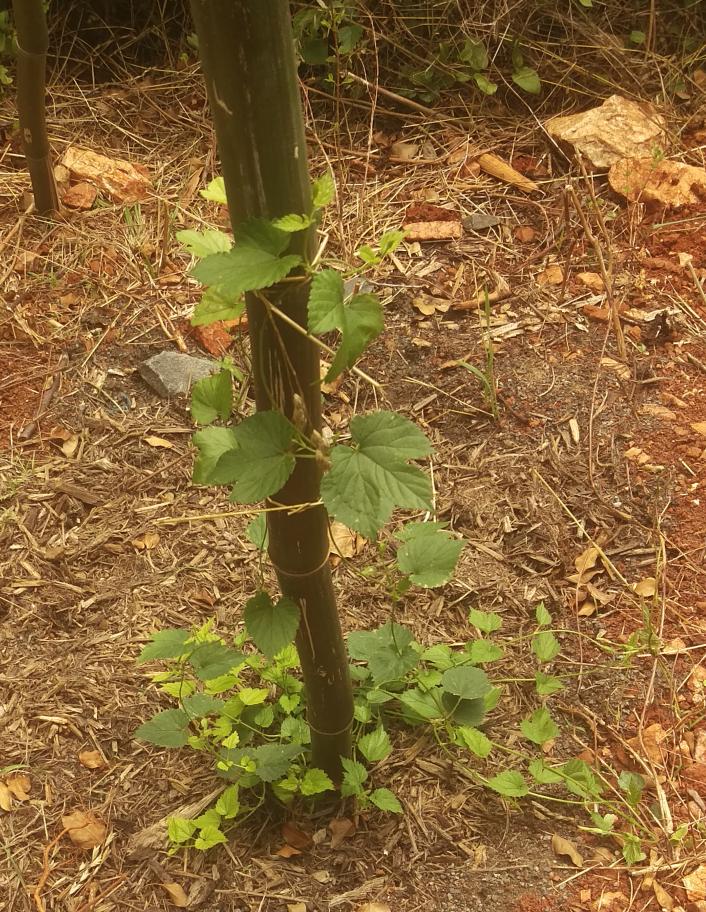 It depends a lot on what your local growing conditions are, since it's well into the growing season at this point.

If it were me (northeast US) I'd probably keep the two existing shoots, and train a few more of the new ones as well, then trim everything else that comes up. The first year of growth is mostly about establishing a strong root system. On mature plants the first few bines are typically cut back and several of the strongest following shoots are trained. However, since it's a first-year plant and it's getting pretty late in the season, you might be doing more harm by cutting back what you have. There's a fair likelihood some of the new bines you're seeing will overtake the first ones once you train them, anyway.

Once you get a few more strong bines trained, you should cut back any new shoots periodically (weekly?) as these will only serve to divert energy from the trained bines. Also, I wouldn't hold out much hope for a good crop from this plant, though you'll likely see some cones. It's probably best to focus at this point on encouraging the plant to set a healthy root system.

3
How do I account for Late Hop/Whirlpool IBUs?
4
All-late addition hop APA
1
Will hop plants choke grape vines
2
Trimming back hops
1
average hop yields
3
How to determine gender of a young hop plant?
1
Can big late hop addition hurt AIPA?
4
Is there a good alternative for protected Nelson Sauvin Hop?
2
Looking for a specific hop rhizome
1
How many hop vines to keep per rhizome?