Suggestions for a thin/no head Wit?

Will maltodextrin and dry hopping post fermentation help a no head/thin beer? The beer has been on 8lbs of CO2 at 34F for over a month (should be around 2 volumes). (I'm guessing it was my experiment with store bought rolled oats versus flaked oats from the brew shop.)

The beer tastes good (I don't detect any off flavors) it's just very thin and has about as much head as a glass of water. I clear all of my kegs with PBW and rinsed with StarSan. I've never has this issue with my previous beers. 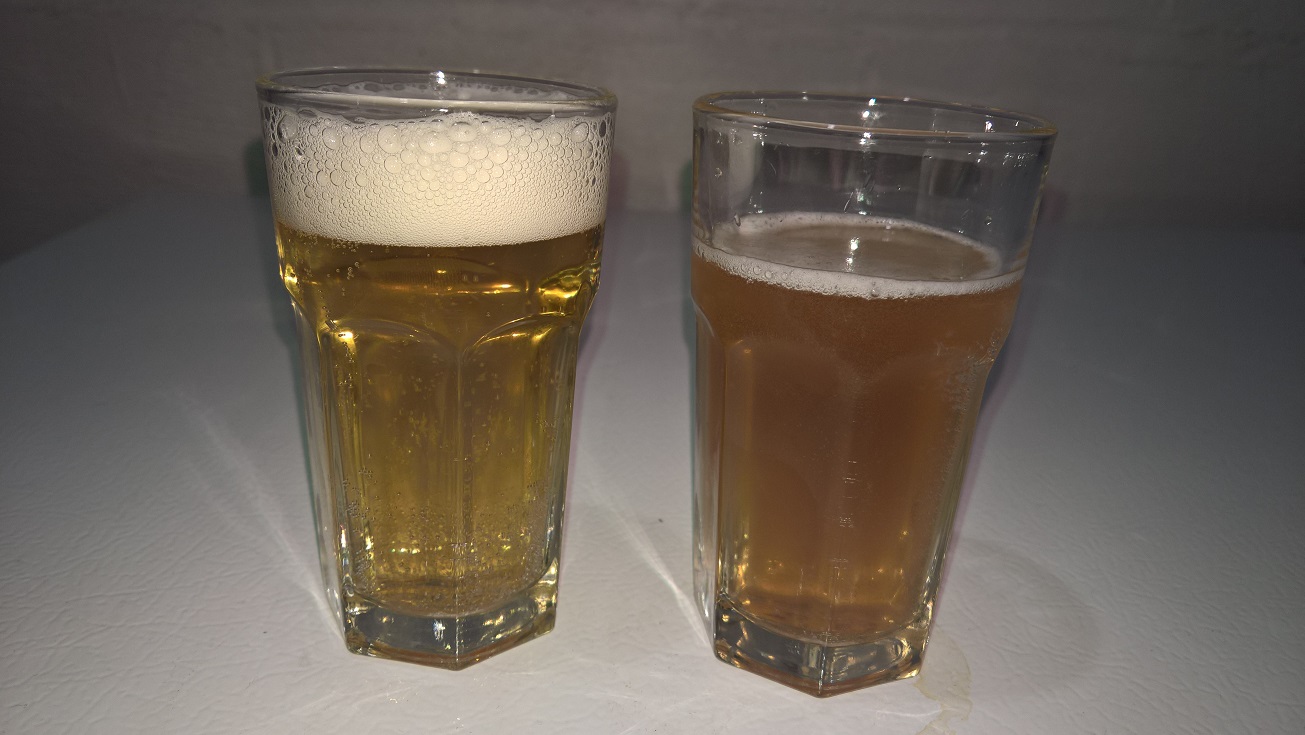 Pilsner on the Left, Wit in Question on the Right.

Maltodextrin will have an affect on body also the head formation and retention, dry hopping may help foam stability as in increase in iso-humulones enhance head retention. I am not sure how dry hopping will affect the iso-humulone levels.

Be warned with the Dextrins, if you have got a few too many tannins in the mix then addition of dextrins may form a chill haze.

I would take a pint sample and try adding a little of the dextrins and see how it works.

Another trick you can try is use some N2 in the gas mix for your keg. N2 gives far better foam stability than CO2 as it has a lower solubility in water.

Since no one has really touched on this part of the question:

'Will [...] dry hopping post fermentation help a no head/thin beer?'

No, and in fact dry hopping would probably only serve to make things worse.

As Mr_road notes, it's the isomerized alpha-acids that contribute to foam stability. Dry hopping adds basically no isomerized alpha acids since isomerization requires high heat or pH or a catalyst to take place and the dry-hopping (and hop storage) environment should provide none of these.

What dry-hopping contributes is primarily essential oils, which will dissolve in the ethanol in the beer. As with any kind of lipid, these oils should do nothing but decrease your foam stability, though it's not likely to be a huge effect.

Aside from the essential oil fraction, dry-hopping will also provide water-soluble tannins, or polyphenols, which, in high concentrations, may contribute astringency to your beer. It might help the flavor, depending on your taste, but the first thing that comes to my mind when thinking of a remedy for a thin beer is definitely not adding astringency.

While I'm at it, here are a few other things you might consider as being potential causes of a lacking head:

None of these are necessarily the cause of this lackluster head, but some combination of them together may have helped create the issue.

This turned into a much longer answer than I had intended, but I hope you find some of it useful anyway.

The style of beer you described in comments "belgian wheat" would by a mix style, but both a witbier and Belgians are known for effervescent carbonation almost twice the carbonation you mentioned (2 vol)

2 volumes is really low and won't form much if any head at low elevations, for any style.

This will at least give a head, then you can work on head retention ingredients and methods for the next batch if needed.

Malto-dexrin will increase the body, but it will only improve head retention if you also have sufficient medium-length proteins in your beer. There's a BYO article on this topic here https://byo.com/stories/issue/item/191-beer-foam-advanced-brewing.

To improve head retention without increasing the body you could use Propylene Glycol Alginate (PGA). It's otherwise known as Stablifoam or Beer Heading Liquid.