My local supplier is selling refurbished cornelius kegs for a decent price and I would like to pick one up. I don't know the first thing about kegging though, and more importantly what additional supplies I need to keg up a brew.

I had a quick look at this tutorial but am still a bit confused. Here's my list so far: 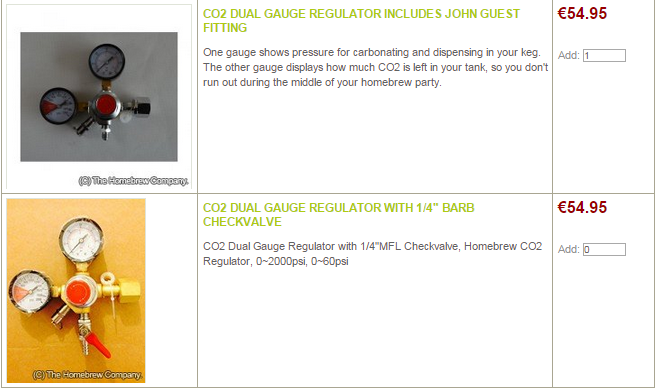 Gas Tank (I'm sceptical about this): 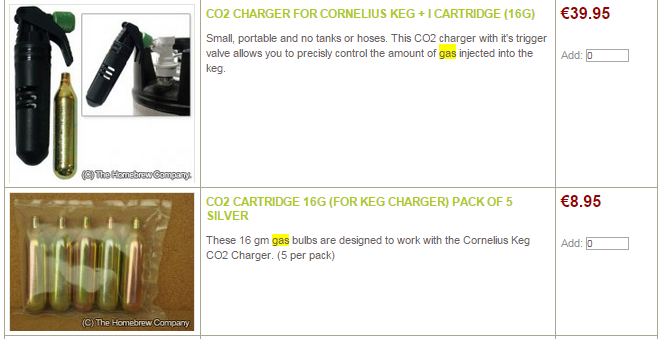 Does this seem like a reasonable shopping list? Do I need one / more of anything? This is my supplier, if anyone wants to make alternative suggestions, they would be more than welcome to.

Any advice is greatly appreciated!

It's too much of a shopping list, and especially to start off.

For kegging, you need:

From what you've listed, you will need either:

But you don't need both. And you really want the CO₂ tank; 5lb is a common size, and will last a handful of batches. Those handheld chargers are not anything but an emergency/party measure.

For dispensing beer, you need either:

I would start off with the beer tap. It has an unfortunately-too-short beer-line length, but it's cheap and will work out of the box.

If you are interested in the beer faucet/tap, note that you would also need some way to mount that faucet such that you can actually pull the handle. Usually this is done by mounting the shank through some sort of wall or draft-line riser. The faucet connects to the shank on one end, the shank has an end-cap that the beer line connects to, and the beer line continues on to the liquid QD.

You do not want chrome-plated taps. Beer has a low pH, and will strip the chrome off the tap, over time. Stainless steel is the only way to go.

Note that I specify "gas QD" and "liquid QD" above. They are not interchangeable; gray=gas, black=beer.

Note that pin-lock and ball-lock kegs are two different things; their disconnects are not interchangeable.

I mentioned the "too-short" beer line length, above. The line length (and a couple of other properties) determines how much "resistence" the line provides. An ideally-balanced draft system is one where the CO₂ regulator is providing the appropriate amount of pressure to keep the beer at its style-dependent ideal carbonation, and then the dispensing side of the draft system is tuned such that by the time the beer reaches the glass, almost all the pressure is "consumed", leading to a pour that's of sufficient speed without over or under foaming.

So, the (apparently) very short beer-line length on the "beer tap" is going to lead to an out of balance system. But I over state this, it is not a big deal, especially getting started. I used a similar picnic tap for a couple of years before building a keezer with proper faucets.

You can probably get:

for roughly the same price as the pre-assembled "beer tap", and that's a reasonable line length/resistance for a much wider range of beer styles. (Assuming 3/16" ID line at about 45F serving temp.)

I notice that you have 5/16 and 3/8 line listed there; the gas line size does not matter. The beer line size does, as per that Draught Quality manual and this notion of line resistance. 3/16 is a good, versatile size.

Also, make sure that the barbs are 1/16" bigger than the line ID. If they're the same size (3/16 vs. 3/16) you'll not only need clamps, but you'll need to clamp them down seriously. If the barb is 1/16" bigger, then you'll need to heat the tubing to get it on, but you probably won't need a clamp. Even for gas lines.

As for the o-ring set … I remove and clean most of my o-rings every time I keg a batch, and replace them once a year. If the keg was "reconditioned" it might have had new o-rings swapped in; they should specify. But if you're unsure, it's always nice to have a set of o-rings around in case they get funky or nicked/damaged and the keg won't hold pressure.

To sum up, this is my recommended parts list:

One last note, I don't know anything about John Guest fittings. I've heard about them mostly from UK homebrewers, online (I'm in the US). Everything in my keezer is standard MFL/flare fittings and/or hose-barbs.

Just to expand on something jsled said regarding the handheld CO2 charger; those small cartridges do not contain sufficient CO2 to carbonate a batch of beer. They can be used for dispensing beer that has already been carbonated by other means. They are handy if you want to be able to take a keg camping, over to a friend's house, or just out in the back yard for a party, and you don't want to have to lug a big CO2 tank and fragile regulator. In my experience, it will likely require two of those small cartridges to dispense one 5 gallon batch of beer.

Not the answer you're looking for? Browse other questions tagged kegging keg corny-keg or ask your own question.

7
Kegging home brew
2
Does kegging require a fridge
1
When is the right time for kegging?
1
What should I expect to pay for pin lock Corny Kegs?
3
How to fit kegging into a small house
1
kegging and carbonation
0
Kegging process and serving PSI
4
Kegging with no fridge
3
Is it necessary to condition if kegging in Cornelius with CO2?
4
Wall sockets for Cornelius kegs line cleaning