How long should a carbonated bottle be refrigerated prior to drinking?

Is there an optimal amount of time that a carbonated bottle of home brew should be in the refrigerator before it is opened? I.e., does all the carbon dioxide dissolve into solution once the temperature hits a certain degree, or is additional time required?

If you are wondering why I don't just stick all of the bottled beer in the fridge, this is why: 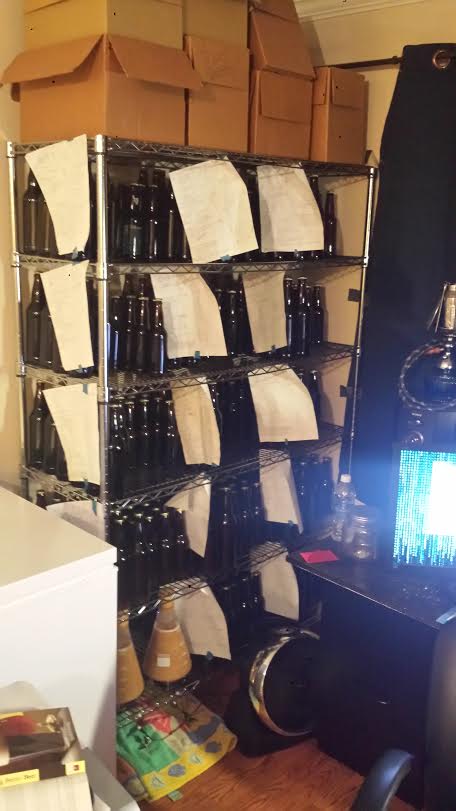 If bottle-conditioning is completely finished, there's no reason it won't be ready to drink as soon as it's cold, if you're only considering carbonation. The amount of CO2 in solution is indeed determined by temperature and pressure, but since we're talking about a closed system, the total amount of CO2 inside the bottle can't change once it's there, it can only move between the gaseous head-space and the liquid.

Accounting for both the different solubility and density of CO2 with changing temperature and pressure is somewhat complex. For example, some quick math shows that when aiming for 2.65 volumes of CO2 in the finished beer, there are ~0.03 grams more CO2 in the bottle's head-space at 65° than at 45°F (at equilibrium; 0.134g vs. 0.104g, respectively), assuming a head-space of 25cm3. As the temperature drops and the solubility increases this extra gas will take time to reach a new equilibrium with the beer. BUT...

...that extra amount of CO2 which eventually moves into the beer accounts for an increase of just 0.04 volumes, or 1.5% of 2.65 vol. A highly skilled trained taster probably couldn't differentiate between the same beer at 2.61 volumes and 2.65 volumes.

So, technically, yes the ideal time would be long enough for the new equilibrium to be reached (perhaps a day or two), but the reality is that the difference is pretty much negligible.

I would not say that there is an 'optimal time' but several factors can affect your cellaring decisions.

Hoppy beers will stay hoppy longer when cold. Other spices probably do too - I've noticed that orange peel also goes away quickly.

Chill haze will go away with a long time spent in the fridge.

As far as CO2 goes, all that gas is already dissolved, but cooling the beer will reduce the pressure. Papazian and others asserted that high CO2 pressure inhibits the yeast production of CO2, but I'm kind of skeptical of that. I feel like the carbonation will rise slightly over long time periods at any temperature, but that's just my impression.

The CO2 dissolution in the beer is a function of temperature, gravity and head space pressure in bottle. It is not a linear function, it resembles a exponential function.

@Pepi is right about having a feeling that the longer it stays on the fridge, more carbonated it will be, the CO2 dissolution keeps going on, but after some time the increase is imperceptible.

Here you can find a table which shows the volume of CO2 dissolved on beer according to its temperature. It basically says: The higher the temperature of the beer the less dissolved CO2 you will have.

Also, I can't point you a book or link by heart, but I've heard and red that 48 hours as you said, is just fine.

The temperature you have to put it will be more related to how much CO2 volume your priming can give you.

I'm not aware of how the temperature will effect the carbonation and CO2. I have been more interested in the flavor impact of the serving temperature.

So the best answer for that would depend on two factors 1) What temperature you're storing them at now, and 2) what temperature do you want to serve at?

I tend to store my beer around "cellar" temperature in an unheated, but insulated, part of my house. And I like to serve most of my beers just a little cooler than that, so a little time (2 - 12 hours) in the fridge or the ice bucket is enough. I can't say I've really thought about how the carbonation changes, but next time I'll give it some thought. I will say that the serious gushers I've had were because of contamination and no amount of cooling would have helped them.

I recently got a keg and have been serving that with a jockey-box. I don't know what temperature that gives, but I think it's a little warmer and I'm still happy with it.

I like to leave the bottles in the fridge for a minimum of 48 hours if I can. This is based on my experiences with gushers; I seem to get a lot fewer if I let the beer "settle" in the chill chest. There might be some confirmation bias involved in this, but it certainly does seem to help.

Time helps increase the amount of CO2 in the beer, but how much is a matter of many factors. FG, temp, and pressure all effect this. Once you achieve a constant temp, the pressure will still not be a constant until the beer has absorbed all that it can either. All of this makes the equation something quite difficult to come up with. In a keg, a week at a constant 10psi takes about a week in the mid to high 30s Fahrenheit. Of course your bottle beer is already being supplied CO2 at an even higher pressure while warm, which should come close to balancing out the absorbed CO2.

Not the answer you're looking for? Browse other questions tagged bottling bottle-conditioning or ask your own question.

4
How long to chill bottles before carbonation is equilibrated?

10
Using Grolsch "Premium Lager" bottles for bottling
18
Expect the Unexpected: How can I prepare for bottle-bombs?
4
Temperature Swings While Bottle Conditioning/Carbonating
5
What's the best/safest way to handle likely bottle bombs?
2
Kegging Vs Bottling in regards to Conditioning
1
How to Calculate Priming Sugar while Bottling Lagers?
1
Fixing an underprimed imperial stout
0
Foam is gone after fridging, Should not I fridge?
3
Secondary fermentation temperature after priming for lager
2
Can I vacuum my primary fermenter headspace for an extended period?