How to make a tap faucet close automatically?

I recently built a kegerator out of a vintage freezer. I've added one tap handle to the door with two more coming soon. The freezer has a latching handle and pretty strong closing action, which pops the tap open dumping beer on the floor...

Can I add a spring to the internals of my cheap faucet to make it close automatically? Does anyone know which one is a good size and strength?

An overview of the parts and assembled version of my taps: 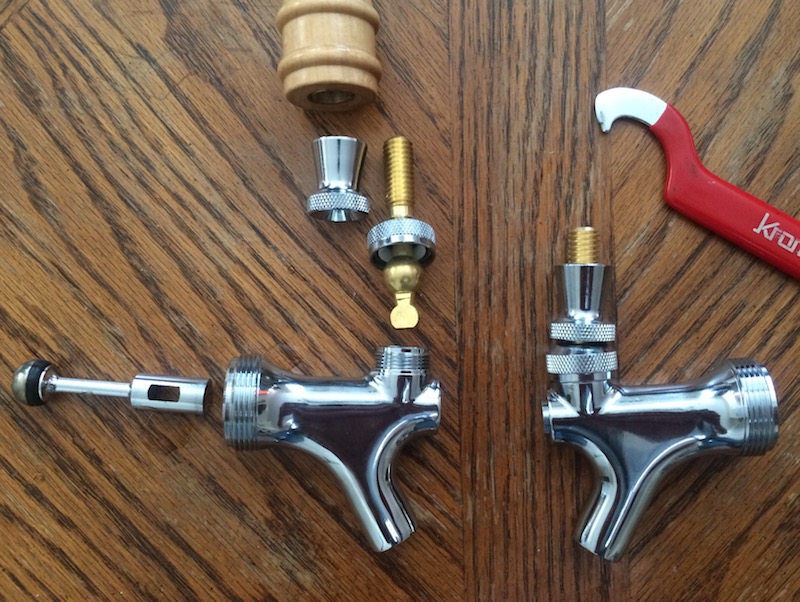 This is the fitting, which I imagine is more or less universal to most shanks: 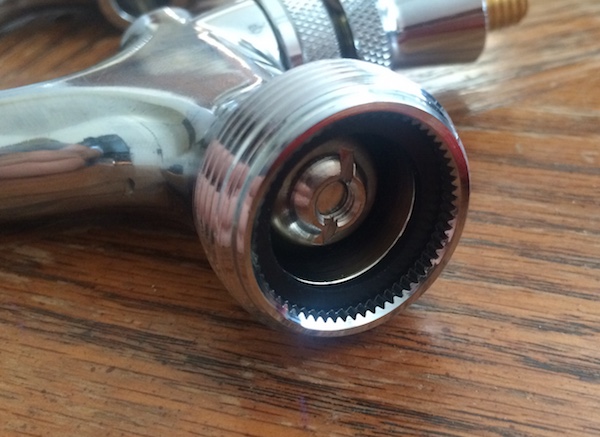 I'm going to hunt for a food safe compression spring that will fit in between the shank and the inside portion of the fitting that attaches to it. Hopefully it will provide enough tension to close the tap cleanly, or at least keep them from pouring out when the door slams.

It seems like most self closing taps listed online have a screw where the little "button" is on the front of the tap so possibly the plug(?) could be machined or replaced to allow for an external spring (avoiding the need for food safety).

Update: I've made my standard taps self closing with the S-1098 Compression Spring from Century Spring.

It's a stainless steel spring with the following measurements:

This strength adds a fair bit of resistance to pulling the tap open, but it's not a problem. The tap closes quickly and cleanly (just a couple drips, about like a normal hand-closing) on its own after being let go, provided the spring is seated well in between the faucet and shaft. Sometimes it takes a couple tries to sit properly. I just set it in and attach it like normal.

The one question that remains is if the springs will hold up (I've installed two in beer taps and one in sparkling water). While they are made of stainless steel, they are not polished, so I will report back in a while with how they continue to perform.

Okay, I've found a spring that roughly works, but is not of an acceptable material (and sadly I don't know it's exact strength because it was in a sampler pack).

The packaged spring C-632 (7/16 x 1-1/16 x .041) from Century Spring felt pretty responsive when it was alone in the tap (quick clean closing action) but didn't close all the way. In the sample pack I found one that is about the same length and slightly stronger tension (12mm x 28mm x 1.25mm) and it closes nearly as cleanly as just shutting off the tap by hand, and solves the problem of leaks when the door slams shut.

The problem is that carbonated water sitting on it for a day or two led to a lot of corrosion. Both of the springs were probably too long for this purpose (I measured the inner length to be about .35" when open and .45" when closed) and likely not a food safe material. I've ordered a handful of stainless springs and will update the answer when I find a suitable size. 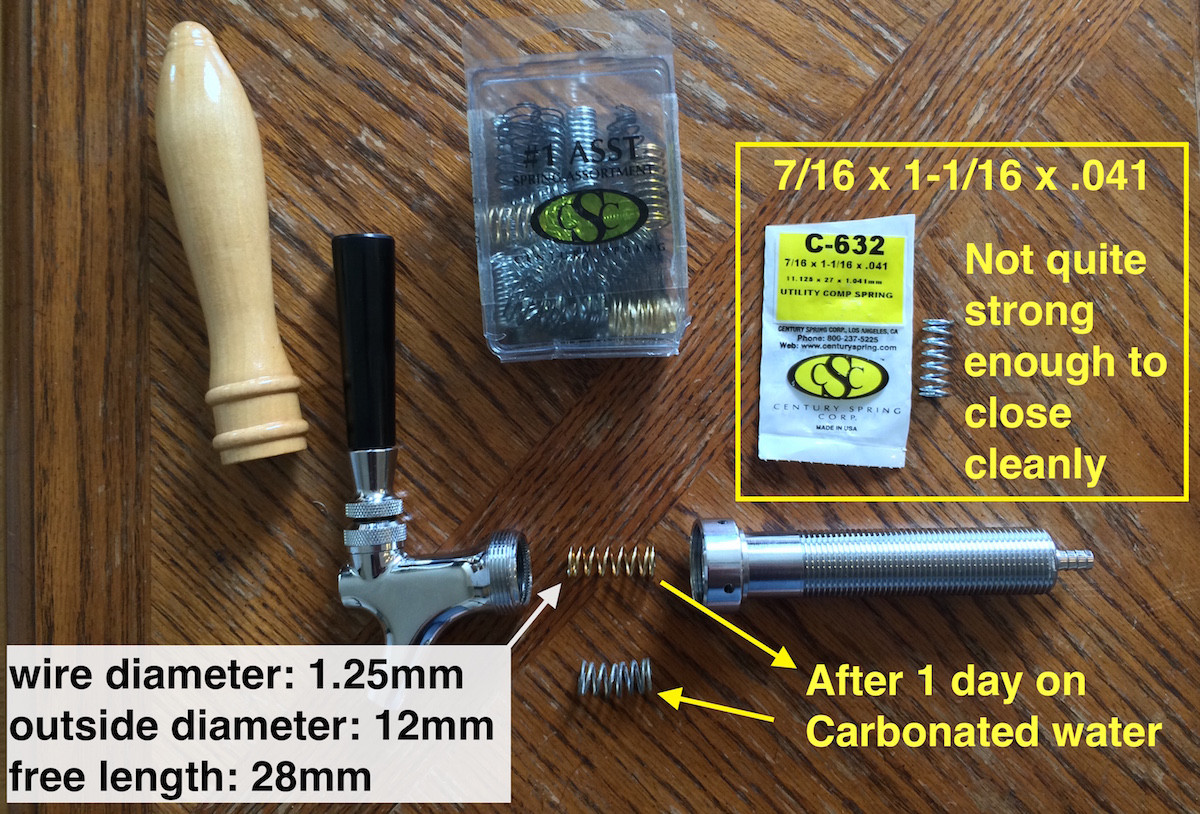 Yes, you can add a spring to the internals of your cheap faucet to make it close automatically. You can use the self closing tap springs for Intertap faucets, but you will have to cut them down to fit. You should also consider grinding the cut ends smooth to avoid scratching the insides of your taps. I did this and it worked for me. Of course, finding a spring that is manufactured to the appropriate length, diameter, and strength and from a food-safe material would be preferred. I do not know the size and strength required.

I purchased self closing tap springs for Intertap faucets with the hope that they would work in my faucets. I purchased my keezer used and cannot find identifying marks of any kind on the faucets, so I don't know what brand they are. They are chrome plated, not stainless, so I assume a basic "economy" faucet that came with a keezer kit purchased by a previous owner. The Intertap springs were WAY too long. After some trial and error I cut them down to about 1/4 of their original length and ground the cut end smooth. They now fit and appear to close the tap. I don't have any beverages in the system right now, so further testing to come.

Not the answer you're looking for? Browse other questions tagged kegerator or ask your own question.

5
Dual Faucet Kegerator and kegs
4
How do I prevent condensation in my kegerator?
19
How long do I have to finish a keg once it's been tapped?
2
convert pump tap to kegorator tap
1
Keezer ~ Collar vs Faucet top tower
3
How to fit kegging into a small house
1
Does anyone make low-profile ball lock disconnects?
2
Nothing coming out of tap (ball lock corny keg)
5
How to eliminate stiff foam from kegerator?
2
How to disassemble a Krome Dispense beer tower?