I bought an used stainless steel really large pot (>90 liters) that was used for cooking, but had some kind of water stains inside.

On a (stupid) attempt to clean it, I had it sand blasted, which completely removed that nice, reflective surface that the stainless steel have, leaving an opaque darkish gray surface.

Is this fixable somehow, maybe by polishing or chemical treatment? If its not, is it still safe to use it? 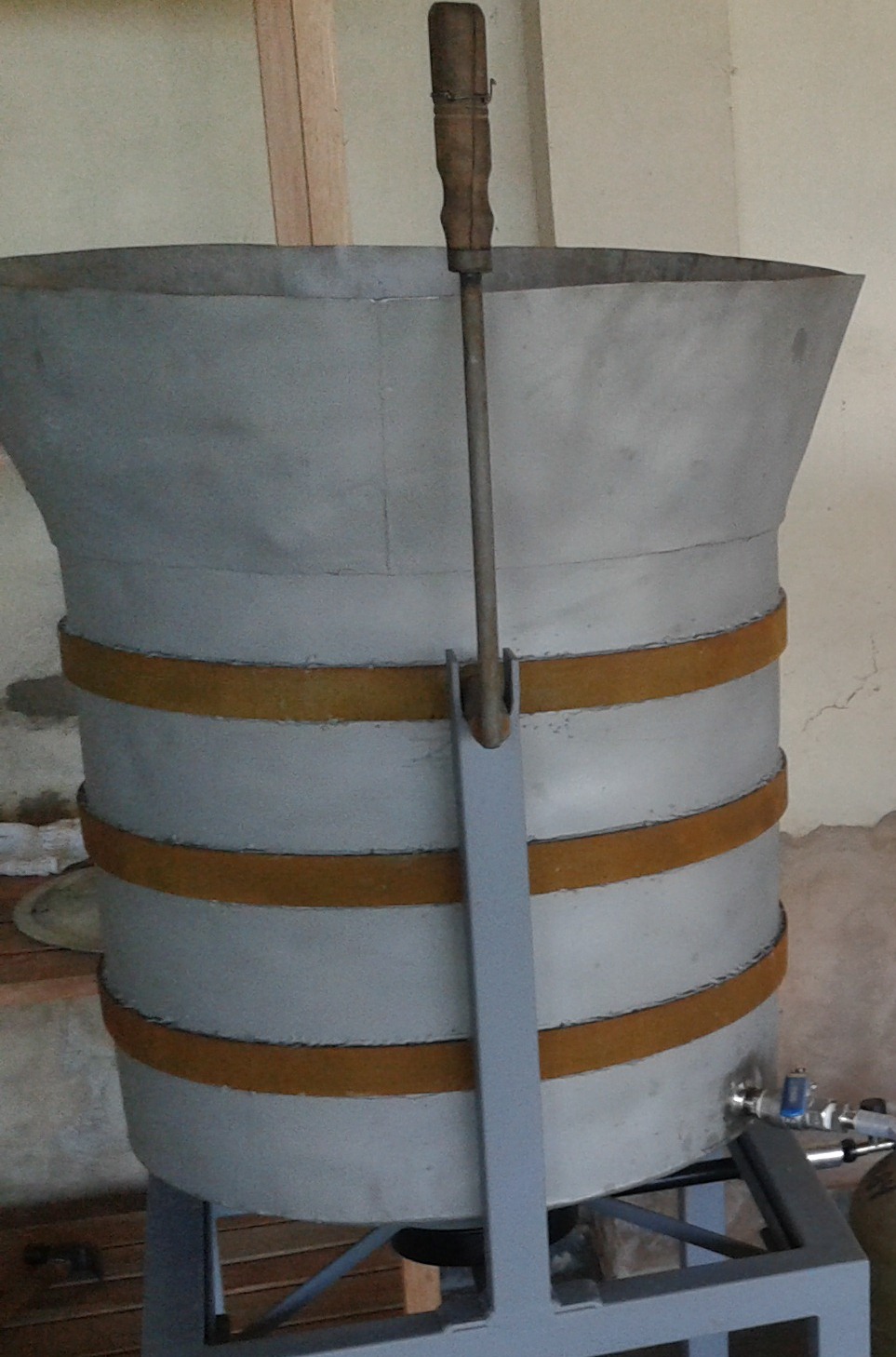 IT MAY NOT BE STAINLESS ANYMORE

Sorry for the huge emphasis and the absurd caps, but I'm reading some... odd statements. I should point out I'm in chemical engineering, and did cooperate with experts in metallurgy.

Stainless steel is such because it does not rust, as everyone knows.
Rust, as many know, is the oxidation of iron.
What few know is why stainless steel does not rust: the answer is, chromium.
Steel, to be classified as stainless, requires at least 10.5% of chromium content in mass (not volume, you'll see why in a little).
Chrome oxides on the surface do not oxide further (due to their extremely high oxidation potential), and protect the underlying layers of iron and carbon. This is called passivation.

What only people in the business know is that to produce those oxides, strong alkalis are used (commonly, other procedures are possible).

This layer is so thin it is invisible to the naked eye, and only crystallographic measures can reveal its status when it is present.
What's easier to see is its absence: rust forms in those points.

If you try to weld some stainless steel, you'll see this process very distinctly: as you lower the chromium ratio adding carbon (from combustion, if you're using it) and migrating iron (by the very definition of welding: you're adding material, even when joining two pieces), rust attacks the welds first, to later spread under the passivation layer to the whole piece. That's the reason MIG and TIG welding techniques were invented, and Friction Stir Welding is making leaps forwards: it works with all metals (as it relies on the metal phase uniformity), requires no chemical and no added material, and does not alter chemical composition (but it does alter the crystal structure).

You said may not be stainless !

It depends on how much material they have sanded: as the chromium lies mostly on the surface (hence the reason the volume percentage is not important), there may be a veeeeery thin layer left. I wouldn't bet a coffee on it, 'tho. Furthermore, the layer may not be everywhere as thin as required, even being absent in some points.

As passivation is a process, you can apply that process to your item! Look up a business to do it for you, it shouldn't have a huge cost. If the reinforcing bands at the base are made of wood, those will have to be taken off and then placed back on: ask if they can do that for you, and if so at which price.

Traditionally, a nitric acid bath and further oxidizers were used to

Too bad that this process was polluting and hazardous. It has interesting interactions (explosions) with some organic compounds, too.

In high enough concentration, not only is it a food-safe preservative, but also a passivating agent for stainless steel.

The chrome layer, when using this acid, is actually restored by the spontaneous oxidation of chrome in the now-exposed alloy.

Don't even consider a nitric passivation for your brewing equipment

I think you've ruined it. Sorry.

I have seen stainless steel handrails and pipelines fixed and welded on site, to get the finish back the guys use abrasive strips of varying grades until it shines. I imagine you only need to get the finish back to a point where there are no areas that bacteria could hide in the rough finish, so a satin finish should be fine and then make double sure with the sanitising before using the pot each time.

Hope this is helpful

If that was my kettle I would go with various grades of abrasive, in whatever form (powdered might also work), in progressively finer grades. Then, if the results looked halfway promising, I would use polishing compound and some sort of power buffing arrangement to put a mirror finish on the interior at least, or as close to a mirror finish as I could manage or stand.

I'm no metallurgist, but it's my understanding that the finer the surface finish, the less likelihood there is of (toxic) nickel leaching out of the stainless and into your brews.

[ edit/afterthought: long, long ago I had a closed stainless kettle fabricated by a welder who advised me to soak the interior with vinegar: in a kind of pseudo-pickling process. I don't know whether it did any good, but I figured it couldn't hurt, and didn't. ]

I think that the pot is beyond redemption, unless you want to put many, many hours of labor into the project. Even with a powered buffer you are still looking at a couple of days labor. What is your time worth? Getting into where the side joins the bottom is going to be a special PITA. I would say scrap it or use it for a flower pot.

In the future, if I were to have such a problem, I would have the item soda blasted (essentially baking soda instead of sand) as the soda is a softer medium and therefore much less abrasive to the metal. It will also leave an almost satin sheen to the metal that is much easier to polish.

Do you know what grade the material was? I believe this would be grade 202 or 304 as these cannot withstand lot of heat.

I would suggest you should not use this material as now the pot can get rusted and this may lead to problems later on.

Your best bet would be to try getting another pot instead because health concerns.

Not the answer you're looking for? Browse other questions tagged equipment stainless or ask your own question.

2
What are best practices for cleaning and passivating stainless steel pot/fermenter?