I've been using these big mouth bubbler's as my secondary fermentation now for a few months: 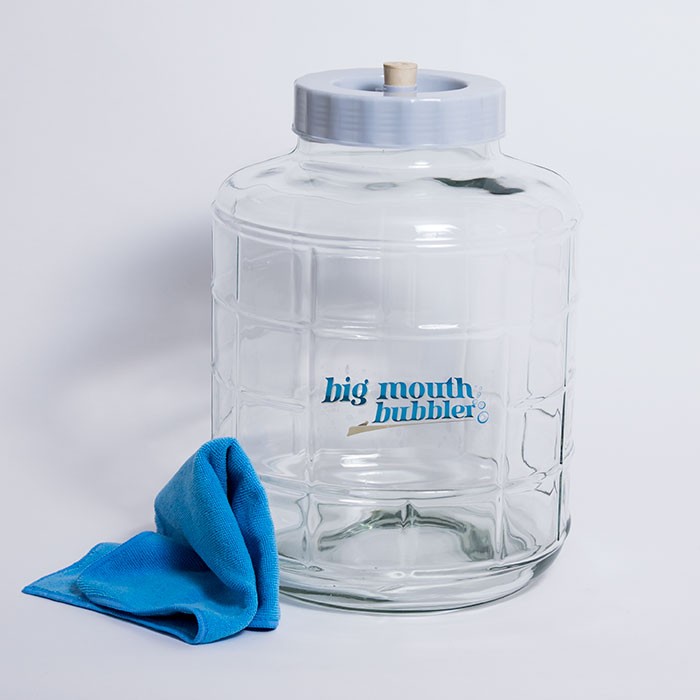 I was originally using them as primary as well, but being one that makes pretty high gravity beers, I was scared of the pressure build up inside even with a blow off tube, and what could potentially happen if the blow off tube got plugged up and too much pressure built up inside. I am however unsure if having used them as primary before could have potentially weakened the container a from having held a lot of pressure at one point.

Anyway last week I had one filled up with 5 or so gallons and carried it down to my basement as my secondary. And upon setting it on the ground (concrete ground, probably my first mistake), when it hit the ground the bottom shattered and beer went everywhere. I've already fixed that mistake by making a padded area to place these on now when bringing them to the basement, but I'm pretty terrified of this ever happening again.

Is it possible using these as a primary weakened it to make this scenario more likely? Are there other precautions I should be taking to make sure this never happens again? Is this just a constant risk when using large glass containers? Any other horror stories I should know about and strive to avoid? I'm starting to think I shouldn't use glass anymore because I'm terrified this could happen again.

Northern Brewer/Midwest has come under a lot of pressure as of lately regarding their glass Big Mouth Bubbler product line. They've confirmed that they are curating their reviews that are submitted to the site. If they are negative, they claim to contact the reviewer personally to resolve their complaints and remove the negative review.

If you do a search for the product on Northern Brewer's website and Amazon, you'll see two very contrasting sets of ratings. There is not one mention of it shattering on their review system, and just about every review on Amazon makes mention of it.

People have gone to the E.R. over the Big Mouth Bubbler (blood warning). Consider yourself very fortunate. Many people have reported malformations in the glass since they are individually hand blown. Others claim they don't sit up straight, but the one common trend all have claimed is how thin the glass is. One person even claimed to have seen it flex and wobble when it's full of liquid; something glass should never do!

It shattering on you has little to do with wear and tear, and more with poor construction. The common advice to homebrewers is to not purchase the glass Big Mouth Bubbler. I've heard of no less than 10-20 complaints regarding them all shattering. Do your fellow homebrewers a favor and alert them to this, you may be saving them a very dangerous, even deadly investment. I've also heard a lot of complaints about the poor quality of the plastic version as well, particularly with the lid being difficult to work with. At least the plastic version won't kill you your send you to the E.R. with lacerations.

Contact Northern Brewer/Midwest and have them either refund you or send a plastic replacement. They're support is a stark contrast to this product. I've heard nothing but praise regarding their customer support. It's unfortunate that when it comes to your health and safety (and that of those around/under you when things go awry), the same cannot be said regarding their product, which they are marketing very, very hard.

EDIT: For those showing up late to the game, it would appear that Northern Brewer/Midwest removed their glass Big Mouth Bubblers from Amazon (still available on their own websites), and one can only speculate the cause being the overwhelming negative reviews it received (last time I saw, it was hovering between one to two stars out of five). It would seem that they also have begun to allow one or two (literally, that's all) negative reviews of their products exist on their own sites, again speculating that it's to cover their bases and give the appearance that they don't delete (cough every one of cough) their negative reviews. The advice still stands. Do not buy this product.

Yeah, it pretty much is a constant risk. I broke 3 before I stopped using glass, one of them by just setting it carefully on a carpeted floor. I finally switched over to buckets and wonder why I didn't do it sooner. I've brewed over 400 batches using bucket fermenters and I have yet to find a down side.

In response to your question about precautions, to add to the other good advice, both Northern Brewer and Midwest Supplies recommend using their brew hauler that is specially tailored to the Big Mouth Bubbler glass fermenter for moving them around. This is probably good advice for any glass carboy -- the cost of this webbing-based system is only about US$10.

In addition to what others have said, thermal shock could have played a role as well. If the carboy was warm and your concrete floor significantly colder then the temperature shock could have shattered the glass. Your floor mats will now insulate the glass from the very cold floor.

Use a Better Bottle. Obviously not the huge open mouth of the Bubbler, but unbreakable, very safe, and sturdy. Just use some PBW and/or Starsan to easily clean.

I recently received a big mouth bubbler for Christmas and when I went to clean it after fermentation the bubbler shattered in my hands. Luckily I didn't get to cut. I contacted Midwest supply they stated they were had a new manufacturer for the product and would send me out a new big mouth bubbler. I just received it I have not used it yet but it is obviously of much thicker glass. Midwest supply was extremely helpful apologetic and delivered the new car boy within a few days. obviously one has to be much more careful handling any glass object as opposed to plastic but I think the concept is a great one. I hated cleaning the traditional carboys.

The company got sued. They now produce a new version and the old one is literally gone from the internet sites. The only reason a company would call back their old stock is if they were forced to do so. They no longer make the bubbler caps either. Those were likely considered a potential cause for the exploding carboys. On the flip side, although you don't get the bubble cap, you do get a nice microfiber towel now. And yes, the new glass is thicker, has far less or even no bubbles, and is now marked as "Made in Poland".

Likely, using it as a primary would not have caused this issue. However, as mentioned earlier, heat might have weakened the glass, especially if you don't get your wort completely cool before putting it in the carboy. Also, being that it was full, it may have hit the concrete a little harder than you think. The glass was definitely too thin in the first generation models though, and they had bubbles galore. Thankfully it has been redesigned, but it's a shame it took this much. They should have found this when they were vetting suppliers in the first place, instead of just finding the cheapest.

I personally, would never use any kind of glass carboy for homebrewing. I love spidel plastic fermenters. I use one for fermenting and one for a secondary. Seen too many horror stories of glass breaking cutting arteries, tendons, and other soft tissue. Just not worth it. Besides there is no taste difference between plastic and glass. Some say there is but my brews are loved by dozens and I just don't believe it. On commercial scale for sure.

Just had mine shatter in my bare hands, 9 stitches and surgery to repair a servered nerve...

Not the answer you're looking for? Browse other questions tagged carboy glass or ask your own question.

1
Airlock not pressurized, any explanation other than a leak?

0
How much heat can a demijohn take?
6
Rubber bung keeps getting out