So... I just enjoyed my fist bottle of my first batch of home brew, and overall it was a success. I know the saying is "pour your first batch down the drain!", but my first batch will certainly give me beer for a few weeks. Not the best beer I have ever had, but certainly drinkable and hoppy.

It was a Double IPA kit from Brewer's Best, with Columbus hops for flavor and Cascade hops for aroma.

I could sit here and try to analyze my beer all day long, but I want to keep this simple and "pick on" the two biggest flaws I can detect. The first is that the hop aroma disappeared almost immediately after opening the bottle. When I first cracked the cap, it had a nice strong aroma, and after I poured it into my glass it also had an aroma. However, after a few sips the aroma was gone.

The second flaw was the color, it had much more of an amber color than most double IPA's I have seen.

So, my questions are, what are some common mistakes or errors in the brewing process which I could look to correct in my second batch to reverse these flaws??

I boiled for 60 minutes, adding Columbus Hops at the start and with 15 minutes left, and then adding the Cascade hops at the end. I let the wort cool in an ice bath, and it took about 2 hours to cool. I transferred to my primary fermenter via a siphon, and I let it ferment for 15 days. I bottled on 12/30/2013 and two weeks later (today) I cracked open my first bottle.

I think you've got 2 problems here:

1) The first is that the hop aroma disappeared almost immediately after opening the bottle..... I let the wort cool in an ice bath, and it took about 2 hours to cool.

These two things are connected. When you add the Cascade hops right at the very end of the boil, their purpose was to impart some nice, American-style hop aroma to the finished beer. Unfortunetly, since it took you 2 hours to cool down, virtually all of that hop aroma was lost, as the hops continued to sit in the hot wort too long. Think of it like over-shooting the temp on a nice medium-rare steak. If you leave it in too long, you'll end up with medium or medium-well, which is still nice, but not what you are looking for.

To get the chill done faster, there's a couple things you can try for next time. You can simply add more ice. Just buy twice as much and drain off the melted water after 20min or so and add some more. Another tip is to continuously swirl the ice water around the carboy/bucket/kettle as it cools, like an ice cream maker. Ideally, you should swirl the liquid in the in the opposite direction of the ice-swirl. That helps a lot, surprisingly.

Also, you can do something like boil down to 4 gallons of wort, then pull a jug of sealed, clean water out of the fridge, and pour it into the wort to hit 5 gallons. This will drop your wort a fair bit right off the bat. You want to get down past 170F or so as fast as you can, the rest of the cooling down to 65F pitching temps can take a little longer, but above 170F and you are "cooking off" your hop flavor.

If you continue to homebrew, and you love hoppy beers, you'll eventually need to buy what's called a "chiller", which is a device used to cool wort down quickly, but it takes some $$$ up front.

As a last ditch effort, if you just can't get that kettle cooled down under an hour, take whatever hops your recipe says to put in at the end, and add them as "dry hops" instead. Heck, DOUBLE that amount! Honestly, DIPA needs a heavy charge of dry hopping to achieve the style anyway, in my opinion.

2) The second flaw was the color, it had much more of an amber color than most double IPA's I have seen.

This is a very common (minor) flaw in extract beers. Here's a tip that's not immediately obvious: you do not have to boil all the extract for 60 minutes. What you are doing is boiling the HOPS for 60min to achieve the appropriate bitterness, and you have to do this in wort (not plain water), BUT you do not have to use all the extract up front. Just put in, say, a quarter of all the extract up front, and boil for 60min with that. With maybe 10min left in the boil, add the rest. Sounds crazy, but once you consider that extract has already been boiled down into a syrup, you boiling it for 50 extra minutes doesn't change anything.

What happens when you boil the total extract together is that you "darken" the wort, like cooking caramel too long. By diluting the concentration, you stop this from happening.

Finally, if you first batch was just a little too dark, and didn't quite have enough hop aroma, I'd still say you did a great job. There's a LOOOT worse that can happen. Best of luck.

There's not much you can do about the colour, aside from pick a different kit. The colour is a result of the mix of grains used to make the extract.

To get more hop aroma, you could try dry hopping with couple ounces of a nice aroma hop like Cascade. After fermentation has completed, add two ounces of hops to the beer. Some brewers like to put the hops in a muslin bag. This keeps things tidier when you're bottling, but might diminish the aroma contributed by the hops. Leave the hops in the beer for 4 to 7 days, then bottle.

As Tobias nicely put, there isn't much you can do about the colour. Although, I would not think too much about it having "much more of an amber color than most double IPA's I have seen". Unless you distinctly are looking for a specific colour, I would bother thinking about it.

When it comes to the aroma I would suggest that you review your hop schedule; there is a nice graph displaying rough times of hop contributions to bitterness/flavour/aroma. 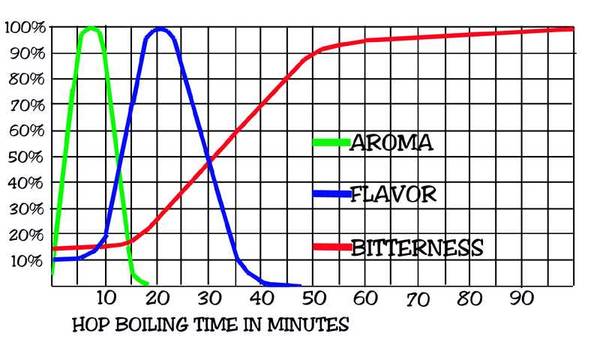 Using this as a guide, try to have an addition of aroma hops between 5-10 before the end.

You may also wish to check for different types of aroma hops, and how they will affect the beer. A very nice guide to different hops is the HopChart, it may contain almost too much information, but it gives you a clear view of the different effects each hops will have.

And lastly, welcome to homebrewing!

Not the answer you're looking for? Browse other questions tagged aroma color or ask your own question.

16
How can I maximize dry hops aroma?
2
Is a sweet aroma normal?
2
Why does my frozen wort smell like black currants?
6
Are German Merkur or Herkules hops noble enough to sub in a Pilsener?
2
What would have caused my wort to darken in the fermenter?
0
Beer aroma during fermentation
2
Tea-like aroma in my beer
3
Why does my lactobacillus batch smell so bad?
1
What's up with the Twizzlers aroma?
3
Does carbonation increase hop aroma?