EDIT: I see from this post and from elsewhere on the Web that a bubbling airlock is apparently not an indicator for fermentation, as there could be a leaky lid. Regardless, doesn't a non-bubbling airlock indicate that something is wrong, as there could be a leaky lid? I'm under the impression we use an airlock in the first place to keep air out as it would oxidize the alcohol into vinegar.

This was my seventh extract batch. For the last 4 batches I've done a yeast starter and aeration with an aeration stone. This has moved my lag time from 24 hours max to 12-16 hours max. For all my other batches I get a vigorous airlock for 4 days. Normally I pitch the yeast in the middle of the fermentation bucket and do NOT stir the yeast around. I normally order the Wyeast over the internet which takes 5 days to ship to me. I use a swamp cooler. Normally I wait until the airlock starts to bubble before I add frozen water bottles to the swamp cooler.

I bought the Creme Ale from NB which uses Wyeast 1056 (American Ale).

However, this was the first time I didn't order the Wyeast from NB; instead I purchased it from the LHBS because I figured the 5 day shipping from NB was harmful.

I also ordered a Dead Ringer IPA which uses the same yeast.

I aerated the creme ale wort (1040 OG) with an areation stone and pitched the entire 1050 yeast starter into it. This time I decided to stir up the yeast in the wort. This time I decided to put 6 frozen water bottles into the swamp cooler immediately instead of waiting until the airlock started bubbling. Using a temperature probe I kept the swamp cooler at 60*F by adding frozen water bottles. The lid was completely sealed.

After 24 hours the airlock was not bubbling, so I purchased another Wyeast 1056 from the LBHS and pitched it without a yeast starter at 48 hours. However when I opened the lid to the bucket I saw the following: (Is this fermentation activity or simply a result of me stirring the wort/yeast from 48 hours before?) 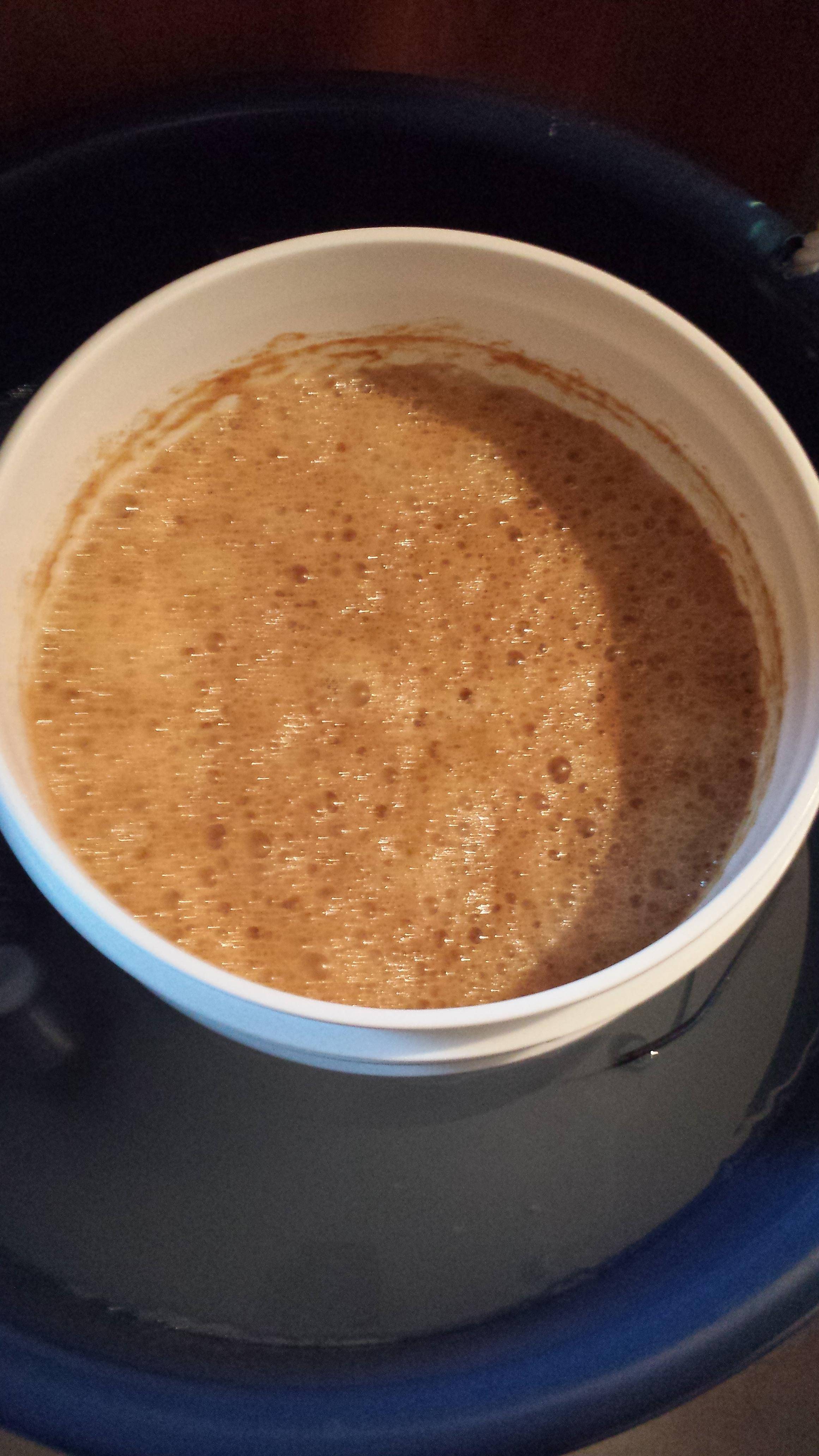 Around 2 hours later (50 total) the air lock started bubbling, so I figured that I was safe and that either the 1050 og of the yeast starter somehow destroyed the yeast (even though I successfully pitched 1060 og yeast starters before) or the Wyeast I bought was bunk. I then added 6 frozen water bottles to the swamp cooler to take it to 60*F.

When I woke up 10 hours later (60 hours total) the airlock stopped bubbling.

I only did three things differently this time:

1) The LBHS sold me bad yeast. 2) The frozen water bottles somehow stopped the fermentation. 3) Stirring the yeast into the wort somehow did something.

What is the problem (if it is possible to diagnose over the internet), and what should I do now?

I am in the middle of brewing the IPA with a 1040 og yeast starter so I will report back. This time I will simply pitch the yeast starter and not stir it, and I won't add frozen water bottles until I see the airlock bubbling.

The picture shows that your beer is actively fermenting. The brown foam is called "Krausen" and is composed of yeast and other solids that have been pushed to the top of the fermenter by the force of escaping CO2

The most likely explanation for the lack of airlock activity is that either the bucket's lid was not properly sealed, or the airlock was not sealed in the bucket lid. Either way, the CO2 will escape the fermenter without going through the airlock. When you opened the fermenter to add the second packet of yeast, you must have done a better job of sealing the lid when you replaced it. With the seal intact, the airlock started bubbling as soon as the internal pressure had built to a sufficient degree.

A leak in your fermenter is nothing to worry about really. Historically, open fermentation was the standard. The krausen will provide protection from oxidation, as it shields the fermenting beer from the atmosphere. The bigger concern is air-born contaminants getting at your beer. The loosely fitting lid, in combination with positive pressure created by Co2 being released, should be enough to prevent this.

As you have learned, seeing or not seeing bubbles in the airlock does not necessarily relate to fermentation activity. Judging by the pic you posted, you have a fine fermentation. That's the visual clue you should be looking for, not bubbles. Again, just becasue the airlock has stopped bubbling doesn't necessarily mean the beer isn't fermenting. Keeping you swamp cooler at 60 doesn't necessarily mean the wort is at that temp. It could possibly be much warmer, which would account for a fast fermentation. Or there could be a leak somewhere keeping the airlock from moving. Either way, based on you picture, it looks good. Wait a couple weeks, then take a gravity reading. My guess is that you'll be fine.

0
No air lock activity
1
Stuck fermentation - Should I be concerned?
1
Murky beer, no bubbles in airlock?

5
36 hours after pitching straight from the vial, no signs of fermentation, what now?
3
Forgot 1 piece to a 3 piece airlock, is this recoverable?
2
Why did fermentation take so long to start?
0
Troubleshooting a stuck fermentation with Ringwood Ale
1
Stuck fermentation
1
filling the airlock
4
Airlock not bubbling
1
First time Controlled Temp Fermentation, May have put yeast to sleep
2
Water is way past the max level line on airlock
1
Ice cider - fermentation won't start, extreme acidity reported