I just brewed a raspberry wheat w/ ~2.5 lbs of frozen (organic) raspberries added to the secondary. I waited about 23 days after adding the berries to bottle, and when I went down to the basement to get ready for bottling day, I found this: 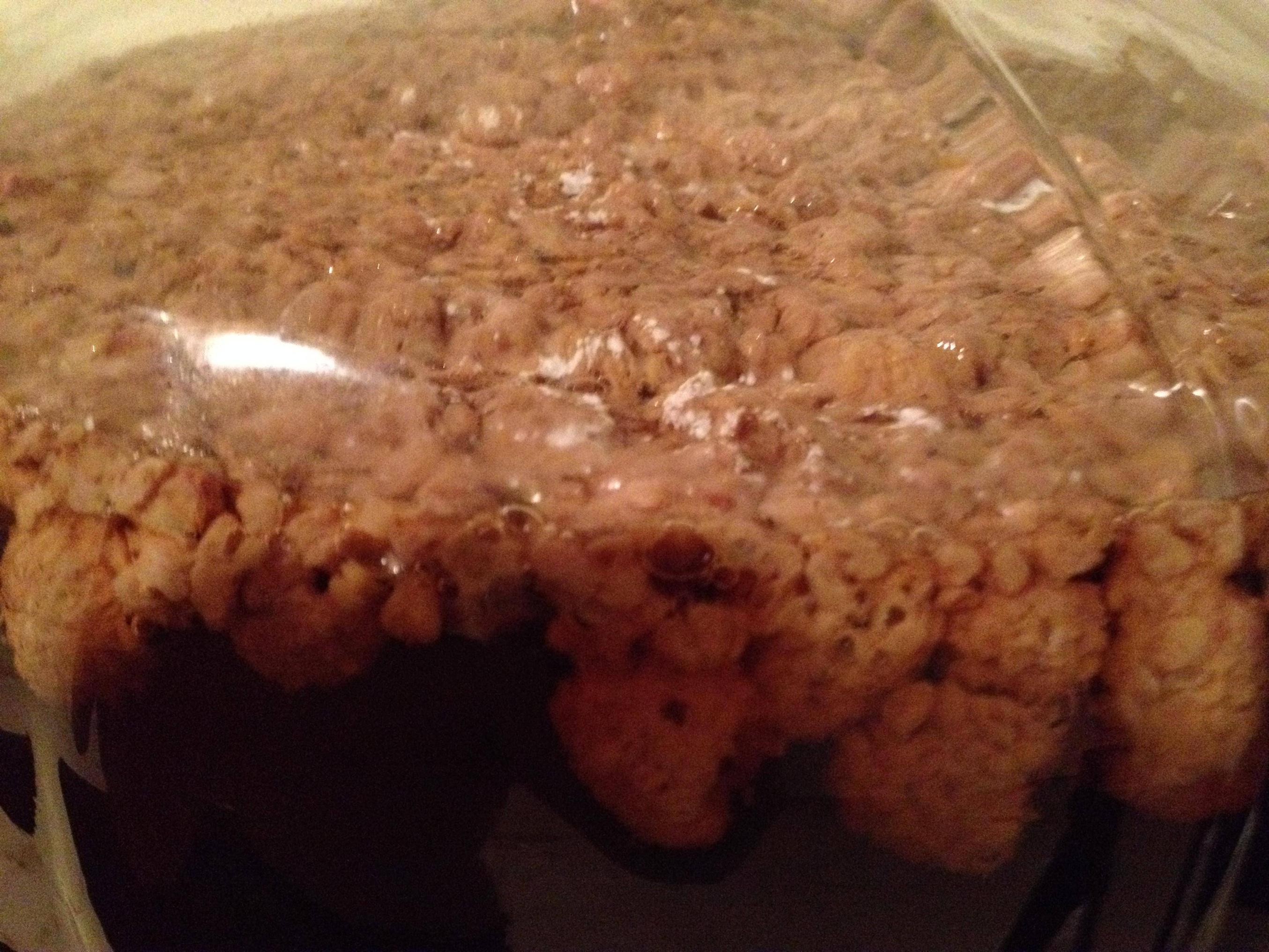 Bright white stuff growing on the tops of a few of the raspberries. I had checked it maybe 24-48 hours prior, and there wasn't any that I noticed.

Sniff test came back fine, so I was just super careful when racking not to disturb any of it (since none of it was in the beer). Taste test from the bottling bucket was also nothing surprising (pretty good, actually), and the SG was 1.011 (including priming sugar, 5.5oz of cane in 2c of water).

So what is this stuff? Should I be worried about my bottles?

Edit: Day eight of bottle-conditioning at ~72˚F, and I just vented + dumped nine bottles that looked roughly like this: 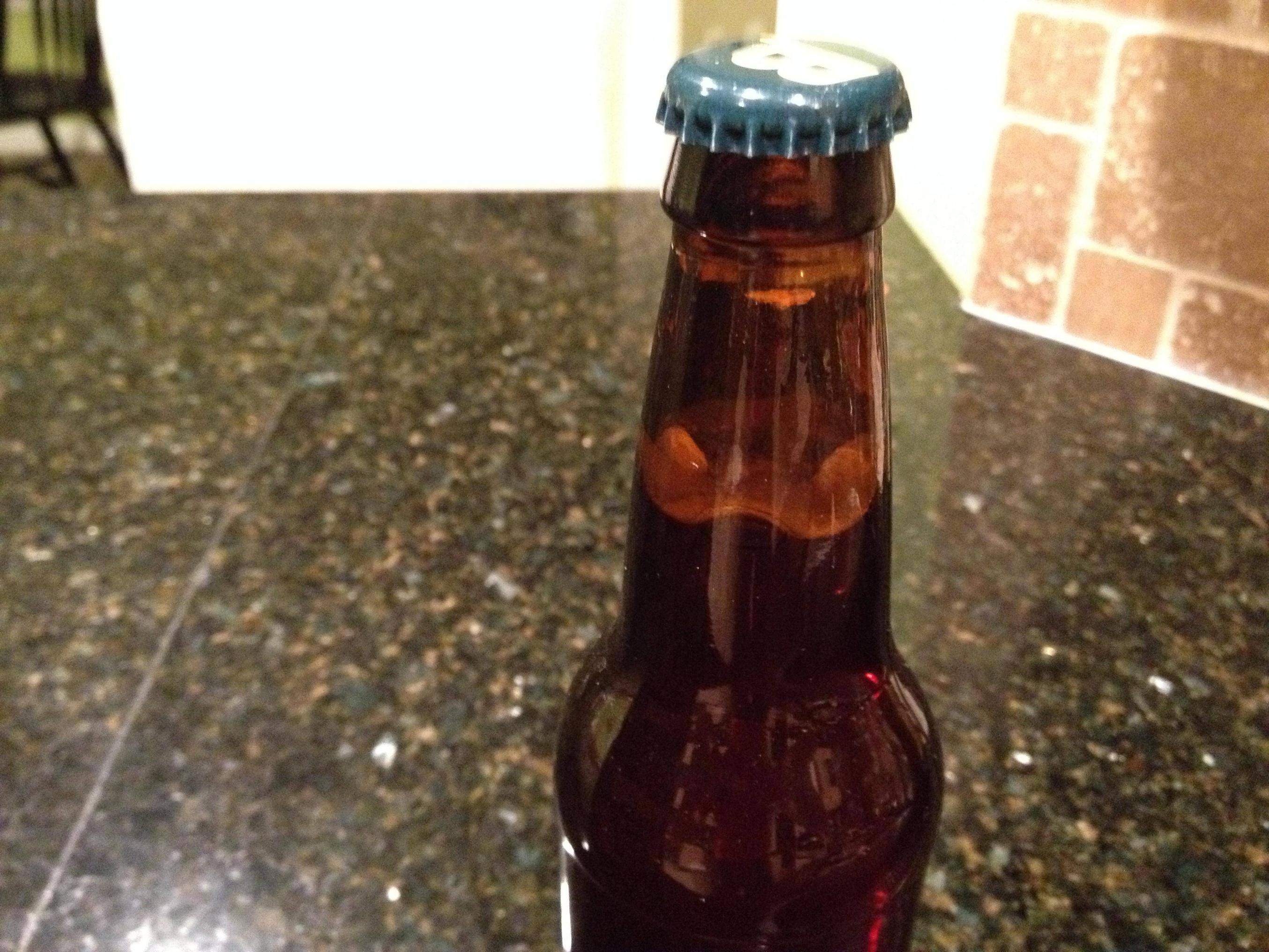 It may be equally difficult to see, but I expect this must be "pellicle" forming. Some bottles had white-covered bubbles, and others had some hazy stuff climbing up the neck from the beer line. All were pretty fizz-tastic when I popped the caps (just a little to let the pressure out at first), and one smelled particularly rubbery.

The other ~36 bottles looked good. Notably, I think it was the last few bottles out of the bottling bucket that were the worst; I had one half-bottle (the last few ounces out) that I capped out of curiosity; he fizzed worst than the rest. There were "floaties" in a few as well.

At first when I looked at it, I thought the bright white stuff you mentioned was actually glare from the lights with the distortion of the carboy, and that you were talking about the raspberries, which have since lost most of their color and look more like brains, if anything.

Now that I know what you're talking about, that is definitely mold/bacteria, with a very high chance that it has gotten into the beer. How well did you rinse the raspberries before putting them in? Regardless, yes, I would be concerned, but, there is always hope. Here's what I would do, given the supplies I have on hand. I would take a large beer cooler (or two) or anything that can contain liquid and withstand a bottle exploding in it, and store the bottles (upright) in the beer cooler for conditioning. In case they turn into bombs, the cooler will act as a container to keep all the glass and beer from blasting everywhere.

By the time you want to drink one, carefully take one out, and examine it for a pellicle at the beer line. Use a flashlight to look at it to see if there appears to be a sort of film resting on the top of the beer (a ring around the beer line is a good hint in this case, but is not always a clear indication). If there is a pellicle, the batch should be considered entirely bad. At that point, store the beer as cold as you can without freezing it to slow down any further fermentation. Try and crack one open in a wide open area (back porch, bath tub, somewhere with head space and can get wet. For protective measures, wear safety glasses and gloves with minimal skin exposure in case it's worst case scenario. If it gushes out, geyser or volcano style, and you're sure you added the correct amount of priming sugar, that's a clear indication as well that it is contaminated("infected"). You can try tasting it, but I can almost guarantee you won't want to once you get a smell of it.

A few side notes worth mentioning. There is a chance that, like you said, the bacteria may not have come in contact with the beer. The bacteria looks minimal (at this point), so that may explain the lack of a noticeable taste or smell, or the bacteria could have gotten in just enough to screw up the batch. There's no way to tell at this point. I will caution though, if one goes off in the cooler, pitch the rest. You don't want to risk the damage, especially if you have kids, pets, eyes, anything that could suffer from glass shrapnel should you happen to have one go off when tipping it over in the fridge by accident.

Also, clean everything super-thoroughly. Your carboy, racking cane, even take apart the spigot to your bottle bucket and bleach/clean the snot out of everything. Bacteria is known to linger in plastic, so make sure you do everything possible to prevent it from coming back in your next batch.

Fruit in secondary is a great thing, but it also carries risks since it isn't boiled/sanitized. This is that negative outcome of that risk. The biggest thing I want to stress though is to not let this get you down. Seriously, don't let this be the end. Contamination is not common, even in fruit beers it isn't as common as some people may lead you to believe. You just have to make sure you have good sanitation practices. Next time, try pureeing and pasteurizing the fruit before adding it. You'll get more flavor from the puree, and it'll be free of any bugs.

Sorry your 4th batch turned out like that. Hopefully the other three were good enough to keep you in the game, I can imagine that seeing an entire batch go bad has to be demoralizing, but there's a lot of good beer to come down the road.

It's definitely contamination, but I doubt it's made contact with the beer, since most contaminats at this stage feed on oxygen and perish in alcohol, plus it's just a little on top of the fruit. Since the beer smells and tastes fine now then rack from beneath, chill and force carbonate (if you have kegs), or prime as usual if you bottle-carbonate, then chill to prevent any further growth.

As a wheat beer you should be drinking this young - within a few weeks at most.

Next time you can warm the fruit to 170°F/76°C which will kill the majority of contaminants without driving off much aroma.

I think this one looks worse than it is.

7
Help! My secondary fermenter exploded!
6
What is the white film on my beer in my bottles?
9
Possibly infected mead: is it worth keeping?
4
New brewer, question about state of beer prior to bottling
5
Can a little human spit spoil fermented beer?
1
Mead is infected/discolored
0
There is a white film on the top of my bottled beer, what is it?
2
Consecutive (lacto?) contamination with different fermenters
3
When racking my beer, it looked like someone had poured cream in
2
Contaminated batch - what went wrong?