CO2 tank slowly losing gas, not sure where the problem lies

So I have a rather simple keezer setup: 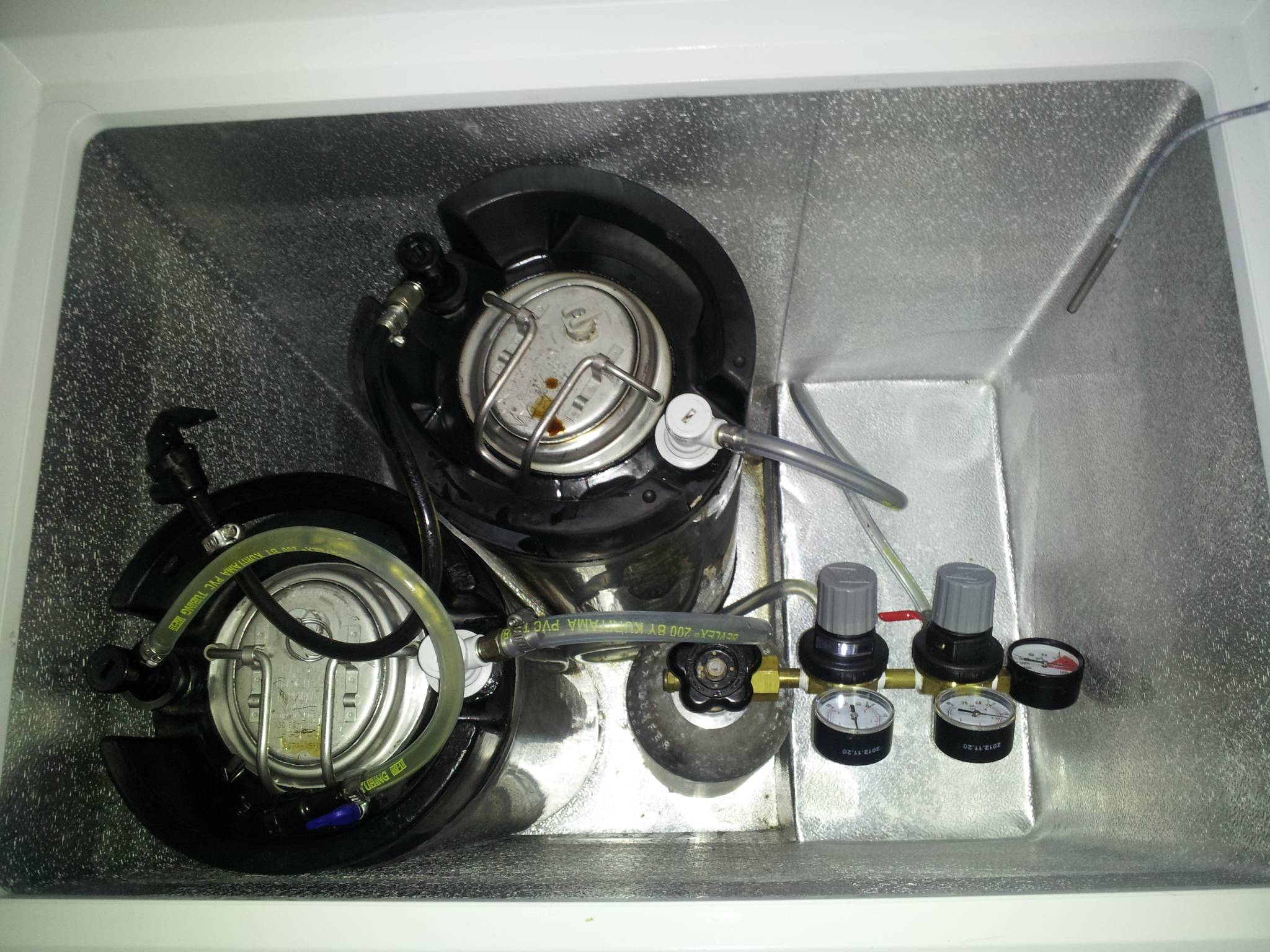 The left keg is currently being force carbonated at 30 PSI. The top keg is being kept shut off from receiving CO2. The left keg's CO2 line is using a threaded CO2 keg adapter, I've ensured it is screwed on as tight as possible, maybe even too tight. No beer is leaking anywhere, no audible gas can be heard escaping either keg... But...

The top keg is being kept cut off for a reason. Initially, the tank mysteriously drained over the course of a couple of days, and the pressure left the keg entirely. When I recharged the CO2 tank today and plugged it back in, ensuring the adapter to the keg was on properly, and turned the red lever, it wasn't receiving gas. It sure sounded like it was, but the dial remained at 0. As I fiddled with the gray dial that adjust the amount of pressure and the cut-off lever, I eventually got it to up in pressure to about 10 PSI in the keg, but no matter what I set it at, it continued to audibly take in CO2 indefinitely until I flipped the lever to cut off any further CO2 from coming in. As I turn the dial back down to open it up, even after hours of letting it sit, it seems to still be at the pressure I left it at before (if not 2-5 PSI more?), yet it sounds like it's taking in more CO2. I assume this is the reason for my question of:

Why is my CO2 tank slowly losing pressure? I understand that as the tank gets colder, and colder, the pressure gauge indicating how much CO2 is left will drop, but by how much? Currently, it crossed into the red on the dial (approximately 450 PSI, 50 below the "re-fill" line). I know the pressure of the tank will decrease with temperature, but I currently have my keezer set to 38F (I'm in a hurry before tomorrow for that left keg). I'm not sure how much I've lost to the top keg, but I left the shop with the tank at 800 PSI, and to have gone down almost by half seems a bit much.

My concern though is that even though I have the top keg cut off, am I still losing pressure elsewhere? Why is it that this started happening in the last week? I've ensured all tube cinches are cinched very tightly, all points where a wrench can tighten down parts are tightened very well, and both kegs seem to be holding their pressure, despite the top one audibly telling me otherwise. Is having the tank at 450, down 350 from today's recharge plus losing a couple of minutes worth to the never-satisfied-top-keg normal? Why would the top keg seemingly take in an infinite amount of CO2, yet retain whatever pressure I leave it at?

Also, I have not banged around the dual-gauge regulators, so I doubt it is in any way damaged. I purchased it inside of a month ago, so it is still fairly new.

UPDATE It would appear that the CO2 has settled at the above mentioned PSI since last evening (approximately 10 hours now). I'm guessing the top keg was the problem, and I lost a bit more gas than I wanted to by toying with it. It has also held pressure throughout the night (or so the gauge says), and it still sounds like it's pushing pressure in when I open the cut-off.

UPDATE/REVISED QUESTION So I gave the thing a pretty good StarSan spray-down. I didn't see anything. but I did notice that once I flicked the gauge, the pressure went from 15 down to about 3, so the gauge was a lie. I continued to spray everywhere, and even went as far as to disconnect the gas line from the keg, and sprayed inside that, then put it back on. After toying with the cut-off lever, and looking around, I started to hear bubbles bursting, ever so slightly. I looked up, and caught one right before it burst, coming out of the connector on the gas line. I disconnected it, cut out the o-ring, replaced it with another, even replaced the entire connector and hose (it was the first connector I had from when I first got into kegging a year ago). Everything is cinched on tight, and still I can see bubbles and hear a slight hiss coming from the connector. What are my options as far as this? Do they sell random replacement parts? Do I even need to replace that ball-lock on the keg? Why is it that this is happening now?

At this point, I have maybe a gallon left. I'm going to clean out a growler, save what I can of it, and try to drink the rest today/tomorrow as part of the American festivities. Would be nice to try and salvage the keg though.

I didnt catch this in your explanation or picture but did you use a good dose of thread tape on all your threaded connections? This got me when i first set mine up. Even though i locked it tight.

Even though your connection is tight air can still escape the tread tape fills the spaces between the threads. It only costs about 50 cents at any home improvement store.

Something else to think about although it doesn't sound like you have this problem. Ensure your pressure release valve on your keg lid isn't stuck slightly open this happened to me once. Just press it closed. And use a liberal dosage of food grade lubricant on your main lid o ring. That helped me seal one of my lids that's a little dinged up. Let me know if you want a few more hints. Good luck¡

OK I am going to take a stab despite having a few beers.

Before I get to rambling I want to mention, I use my spray bottle of sanitizer (starsan) to check for gas leaks by just spraying the crap out of everywhere gas could leak from.

This sounds like the leak is in between the shutoff valve for this line and your ball-lock fitting? If you are confirming the keg hold pressure on it's own by disconnecting it I would also check that connection, I have had a crappy gas ball lock before and it leaked like a siv (no audible). It also looks like you have no hose clamps on that line, is that just the picture? Although I havent had any problems (assuming it the right size tubing) keeping pressure without a hose clamp, I would spray that down too. Side note before I forget, sometimes the noise from the regulator is louder then the leak. And going a little outside of the box, do you have the o-ring in between the tank and regulator? ....I will check this question tomorrow but to be honest I have lost my comprehensive abilities for tonight, good luck and try the spray thing!

Had a similar problem. Could not figure out what was happening. One night, when pouring a beer and standing around the kegerator all of a sudden the regulator starts spewing out CO2 and turns white from the cold gas!! Did this for about 8 seconds and quit. Replaced the regulator and have not had an issue since.

Not the answer you're looking for? Browse other questions tagged kegging or ask your own question.

1
No psi shortly after kegging
6
Backflow into gas line
7
Keg/CO2 question as I think about moving to kegging
1
how can i carb multiple kegs at the same time?
0
Different Carbonation Levels on a Single Manifold
8
How much CO2 should I expect to use up when force carbonating?
3
Keg not carbonating.
0
Kegging process and serving PSI
1
Can't maintain pressure on keg
2
Is it possible to know how many volumes of CO2 end up in a keg after force carbonating?