I was hoping to put together an information system that could measure the temperature of the water in a bucket where I place my fermenting-bucket and notify my smart phone when I need to replace the frozen water bottles.

I have an old Android phone. I know Java and can learn to program Android relatively easily.

What I am missing is the networked thermometer that can measure liquids.

The iGrill could potentially work; however, in the FAQ section it states that it cannot measure liquids. A potential work around would simply be to encase the temperature probe in a water proof enclosure and submerge it in the water of the swamp cooler, but I would rather work with something that could measure the water directly.

Does anyone know of such technology?

You may want to check out brewpi - it's a fermentation monitor, but isn't limited to just fermentation. The temperature devices used are DS18B20 temperature probes. You can get these pre-made in waterproof housing from sellers on ebay - the project also has a shop that sells them. The manufacturers claim they are accurate to +/- 0.5 C, although my tests against a calibrated thermometer show in practice they are accurate to +/- 0.1C. 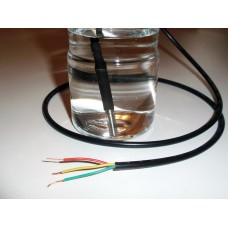 Although the BrewPi project mainly touts the raspberry pi as the main wireless device, you can collect the results over any serial interface, such as a spare PC, or a linux-capable router.

The project logs data into pretty graphs so you can see the temperature now, or review later for any unexpected swings. I know the code well - it would be possible to alter the code to send a message when the temperature rises above a pre-set value. You'd then code a java app on your android phone to handle this message.

EDIT: I didn't mention, these probes are digital - they communicate temperature using a digital protocol called OneWire. The advantage is that you can connect multiple sensors to the same 3 power/data lines, and they produce much less noise over long cables compared to analog sensors like the LM37. The disadvantage is that you need to implement the OneWire protocol - e.g. use a OneWire library. This is the approach taken with the Arduino in brewpi, which has a ready available OneWire library.

If you are using a fan, the brewpi can control the fan to increase the rate of cooling when necessary. The controller uses a predictive algorithm, which avoids overshooting, and is much more accurate compared to a simple on/off thermostat algorithm.

I'm actually in the exact same boat. Well.. Similar. Wasn't going to bother with the smartphone, but will have some form of communication. Here's what I have in mind

I just ordered a USB Thermometer off Amazon that people have managed to get working in linux (specifically Ubuntu, but it sounds like it is agnostic to distros). From here I could whip up a real simple web app that communicates with a database I house locally (either MySQL or MongoDB, depending on whether I go a LAMP stack or with Node + Express). From there, take periodic recordings of the swamp cooler, and push out some form of communication. I'd like to get it working on Raspberry Pi, which while my knowledge of it is limited, I've heard that some people have used Google Talk with it for notifications, in which case that's handled. Just something to chew on. I'm excited for the delivery so I can get cracking.

Edit: The same crazy dude in the second link above is also a homebrewer (same reason for using the thermometer), and even went as far as to use a USB microphone to measure the airlock's bubbling to determine the length of fermentation.

If you are into brewing (daa) and want to get your hands dirty(er) (into programming and electronics) you migth check "the electric imp" a relative simple and small datalogging device. 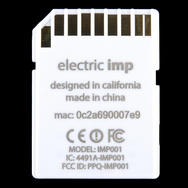 It's well documented, user friendly, web avaliable and It also connects to your home wifi

Here is a full instructable implementing a temperature web sensor.

Hope you find this usefull!

PS: I'm sure you could replace the NTC thermistor with other sensor

I also use a water bath for controlling fermentation temps. I found a bluetooth weatherhawk temperature sensor that reports to a mobile app and it is waterproof. So I built an stc 1000 temp controller to selectively switch between an aquarium heater & small recirc pump on the hot side and a peltier liquid chiller on the cold side.

Here is a pure RaspberryPi + DS18B20 solution (no Arduino required) and tutorial by Adafruit requiring the following:

I use La Crosse Alerts, its a WIFI based temperature probe. It's on Amazon for about $75-$80 (Link to the product). It has been very accurate, and beyond the great live chart available both on an app and website, you can download the data directly to a spreadsheet. You can also set alerts to your phone or email based on parameters you set! 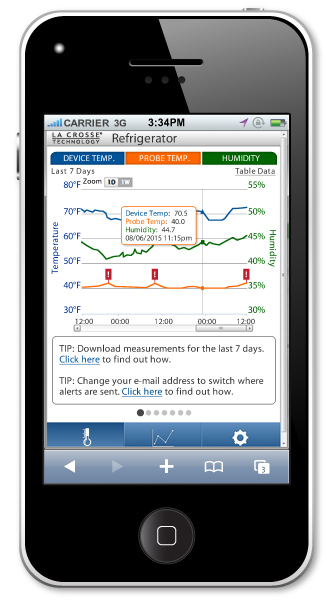 8
Would placing the fermenter tank in a tub of water be a good way to handle hot environments?
7
How Should I Place a Digital Thermometer into My Fermentation Chamber and Keep it Airtight?
7
What is Responsible for the Dissipation of Krausen, and may a Batch be Bottled if its Krausen has Not been Dissipated?
1
How Much (and How Fast) of a Drop in Temperature can (Ale) Yeast Tolerate? (And Preliminary Results from My Experiment)

3
What is a swamp cooler?
4
Calculating Amout and Temperature of Water For Mashing
6
Aquarium water heaters for Fermentation chamber
1
For a Swamp Cooler, what alternatives are there to Bleach, Vodka, and Star San?
2
What is the best way to measure temperature in a swamp cooler?
2
Why Does a Heater in a Swamp Cooler Require a Pump to Distribute the Heated Liquid?
0
What is the Best Water Heater and Pump to Use in my Plastic Swamp Cooler (for my Requirements)?
3
What is the proper way to maintain temperature in a water cooler Mash tun by adding hot water?