Soooo, I know that sunlight is harmful to beer. I am bottling into brown glass, so that part is covered. But for primary fermenting, I'm using a clear glass carboy, and I'm keeping that in a closet. (Secondary fermentation, if I do it, will be in a dark green glass carboy.) Ninety percent of the time, the light is off in the closet, but there are occasions where the fiance or I forget to turn off the lights, or I'm going in and out frequently for a couple of hours and leave the lights on.

I found an answer regarding flourescent lights, and another answer for incandescent, but my lights are halogen track lighting. I don't know enough about physics to say for sure, but I'm guessing that the answer is similar: halogens won't have a tremendous effect.

Is this correct, or do I need to be super-vigilant?

For skunked beer, we're worried about Violet and UV light. There's a lot of information available on this, so I won't go into that science. Basically, we want to limit as much light less than 500nm as possible and all light under 400nm (UV) if possible.

Halogen bulbs follow a similar pattern to incandescent bulbs (ref). This chart compares different bulbs, but halogens are not included. 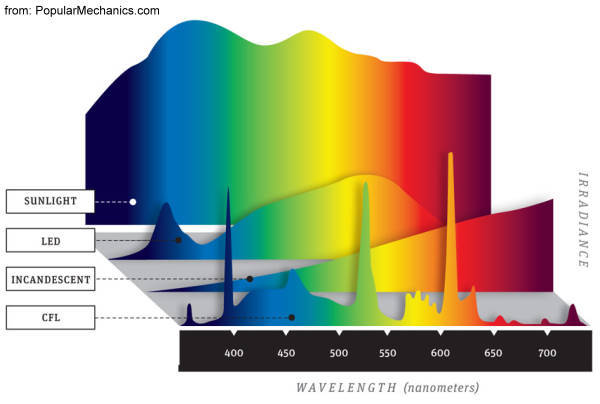 You can see that there's a big spike around 400nm in CFLs, as well as a small one below 400nm. There's also a lot more energy between 400 and 500nm compared with incandescents. LED light would likely have the same skunking problems.

Yes, you shouldn't leave the light on, but also yes, it won't be as bad as CFLs. I suggest you put a dark T-shirt over the carboy for those times when the lights are on all night long. Even regular light bulbs will skunk beer if the exposure is over too long a time.

Cover the carboys in a blanket for no light exposure.

You can use opaque trash bags. Check for opacity then find the size that loosely slides over your carboys. I've daylight streaming into my brewing area and unusually long primary fermentations, yet no skunk aroma.

Not the answer you're looking for? Browse other questions tagged fermentation skunk or ask your own question.

4
How much light is too much light?
4
light sources and skunking beer

7
Light control during brewing process
4
light sources and skunking beer
4
When is it okay to bottle?
3
Is secondary fermentation advisable for Belgium witbier?
4
How much light is too much light?
1
Return samples from a fermtech wine/beer thief to a carboy
1
Fermentation Temperature
1
Cider confusion
1
Finicky Wyeast 3724 Stall
1
Is my yeast dead or stuck or just fine?